And eventually we arrived in Etosha National Park. We had heard so much about it and were curious about what we would see.

We weren’t sure how long we would stay there, so we started off with paying for 4 days. We were told that you can prolong your visit anytime. We presume that was possible because of Covid and still low numbers of tourists in the park.

We had been told that normally one has to book for Etosha a year in advance, so yes… we were a bit apprehensive if this visit would work out for us or if we would run into camping problems.  It later proved that our fears were unfounded. There was plenty space in the various camps. Only in the first camp, the proper camping spots were all taken, but luckily we’re pretty self sufficient, so… we (and some other travelers too) parked in the day visitors area, with a protective owl mom nesting against a pile of bricks just meters away,  and called it a day. In all the other subsequent camps, there was plenty space! 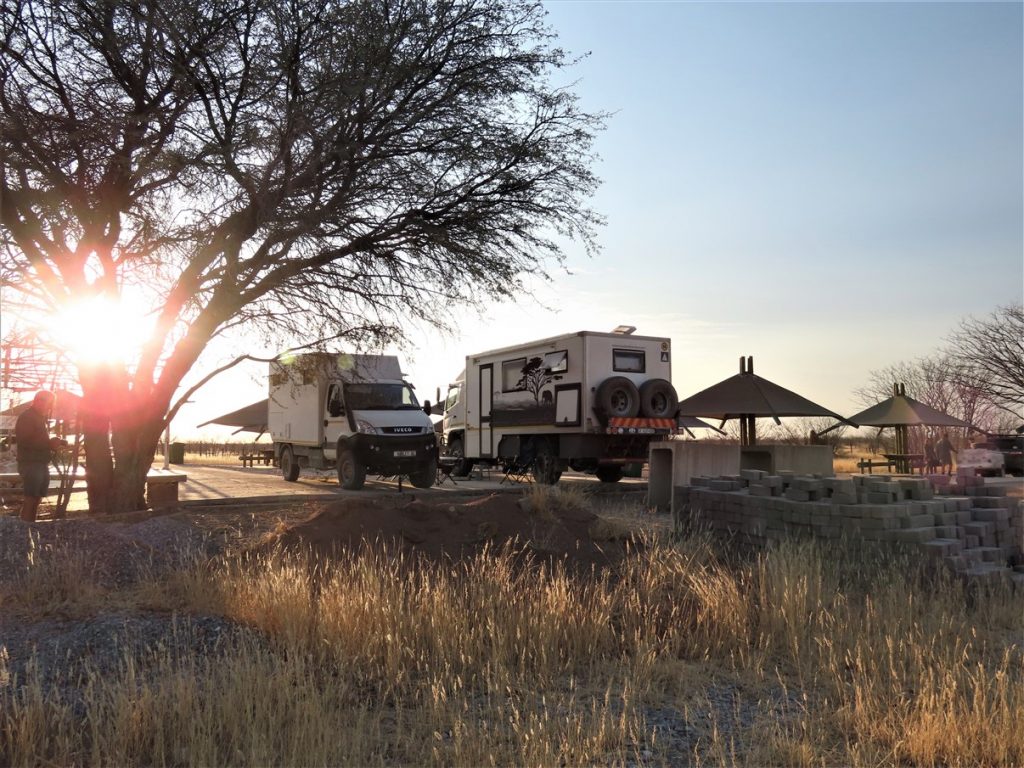 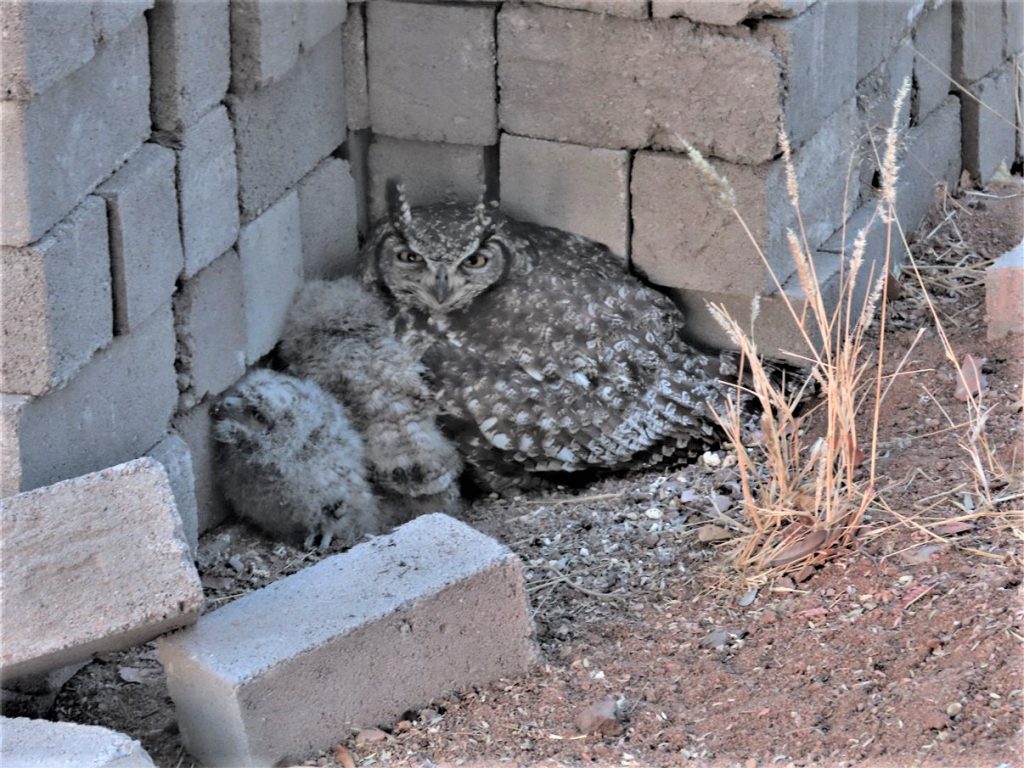 At one waterhole we saw how a hyena terrorized a dazzle of a few hundred zebra’s. At other water holes we had already figured out that  zebra’s are pretty temperamental and when there’s a whole heap of them together it’s a non stop action with zebra’s jostling for position, kicking and braying, slipping on the muddy sides of the waterhole, etc, etc.  At one particular moment we were quite focused on the splashing and kicking activity of the zebra’s and not really looking at the other animals around the waterhole. And all of a sudden, there was tension in the air and all these zebra’s stormed out of the waterhole in a cloud of dust. We didn’t know what happened.

Until we looked in the direction that the zebra’s had run away from and  saw a very pregnant hyena  walking to the water. It was quite amazing that for the 30 minutes or longer that the hyena was drinking and bathing, not one zebra (or any of the other animals for that matter) even considered getting back to the water. All the animals were staring at the hyena from a distance and she had all the time of the world to have her pamper session in the waterhole… the whole place to herself! Once the hyena left, it didn’t take a second before the waterhole was filled with jostling zebra’s again. Although less spectacular, in the few days after we saw more hyena’s taking a bath in waterholes and the other animals always kept a respectful distance from the hyena. 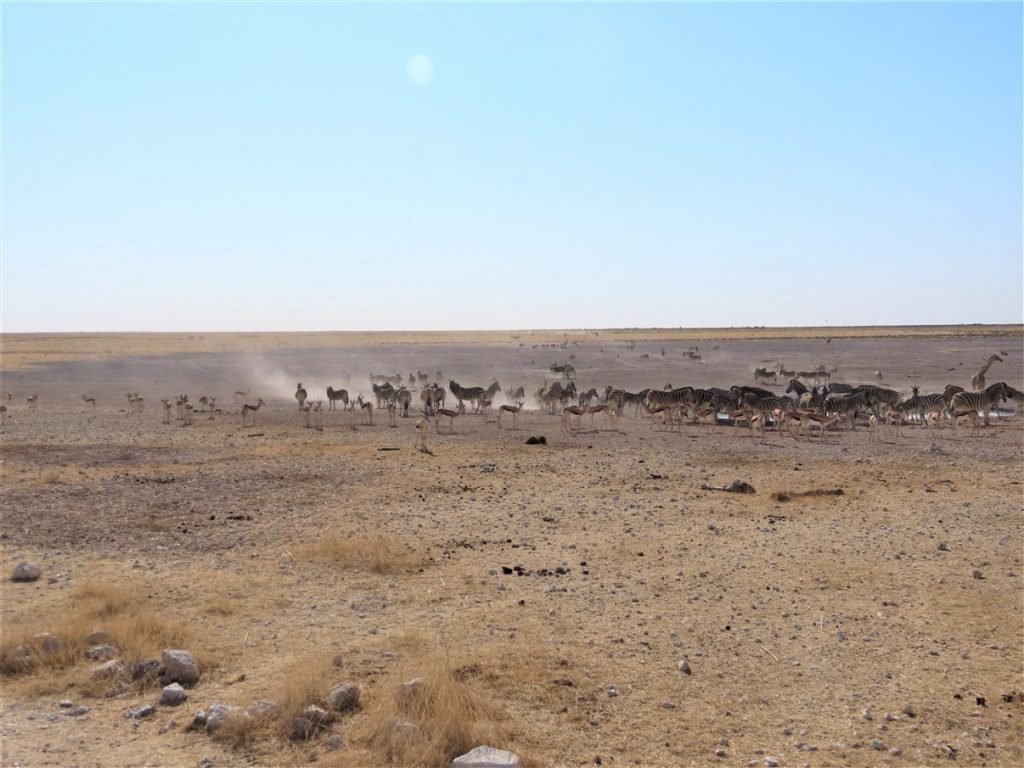 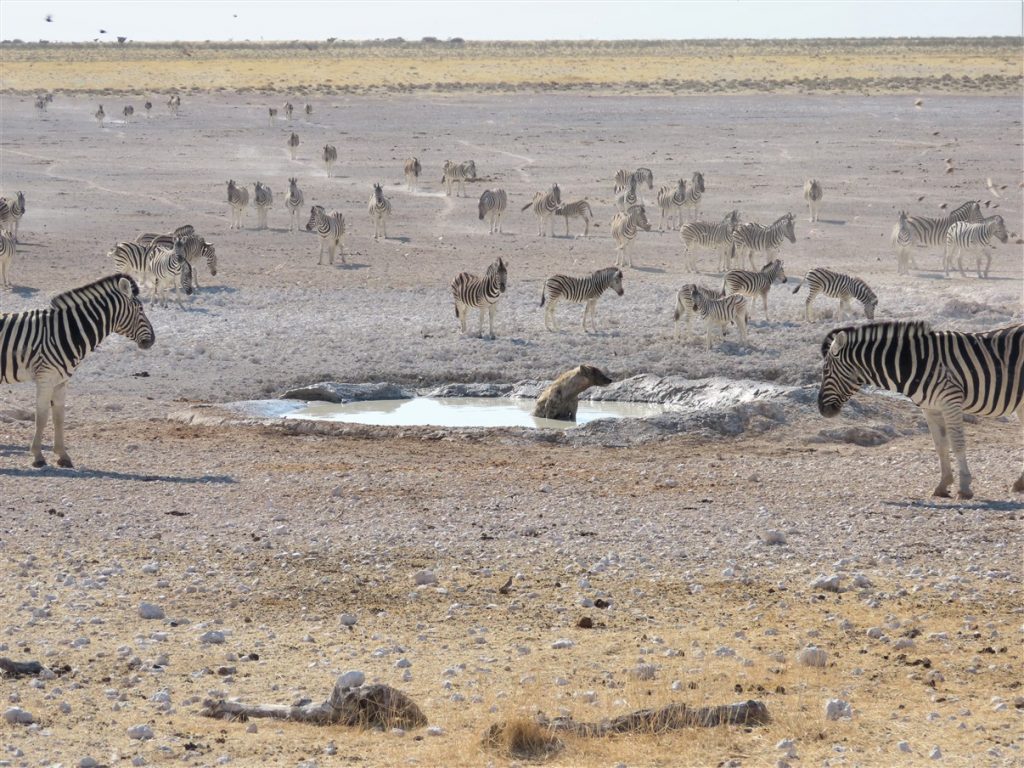 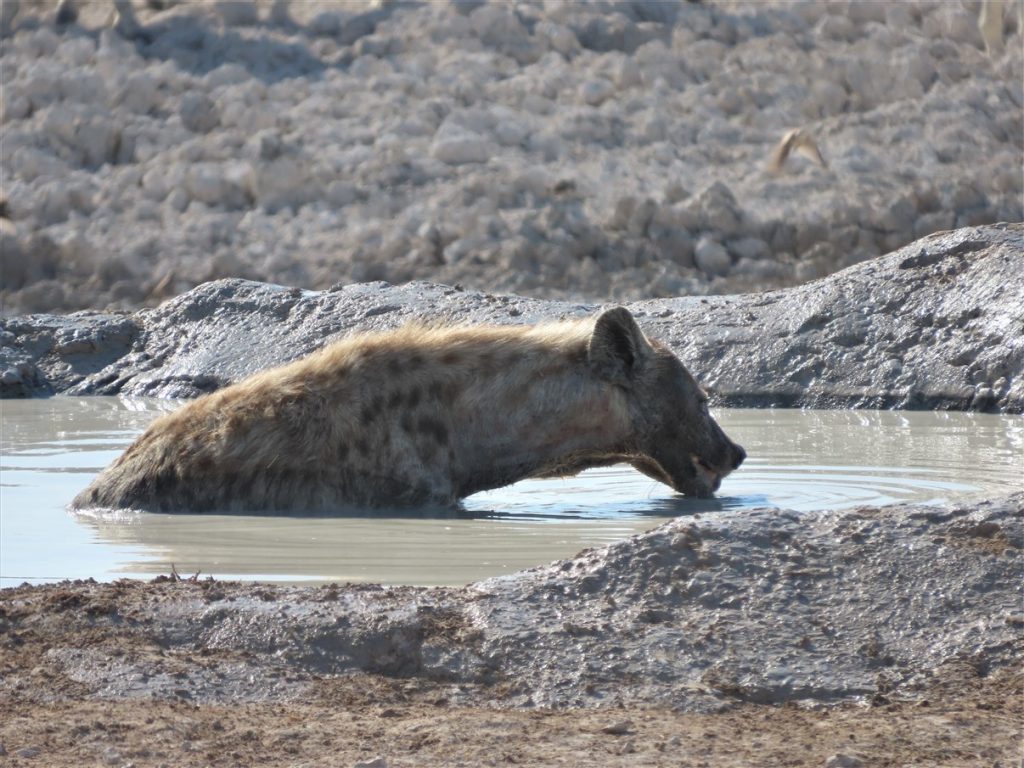 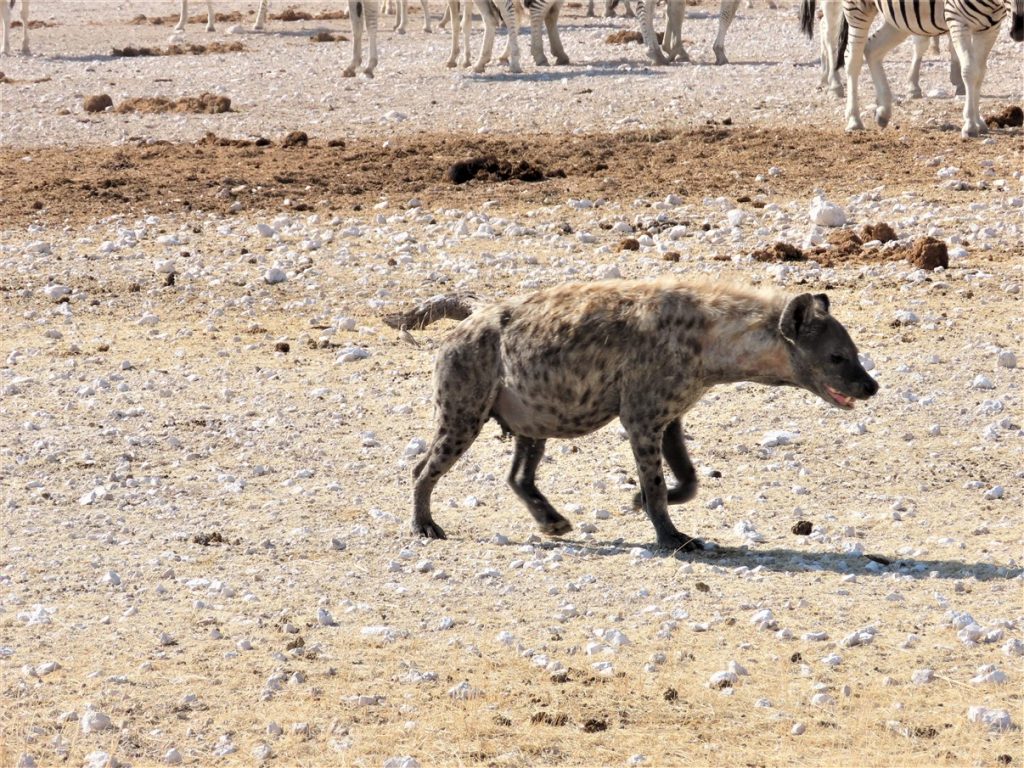 The sheer number of animals was mindboggling. Although we visited lots of waterholes that had regular visits of reasonable small numbers of animals- like we had been used to in various South African parks- there were a few holes that attracted heaps and heaps and heaps of animals. At these water holes we saw hundreds of zebra, antelope and blue wildebeest walking up to the water, trailing dust clouds. There were also big herds of elephant. This was any game park in South Africa on steroids. Quite amazing!

Although it is always interesting to get the perfect close up photo of an animal, in a case like this, the environment is key. To try to get these long lines of zebra or a whole congregation of animals around one waterhole in one picture reduces the animals to almost pinpricks. But it gives a much better idea of scale, numbers and landscape! And yes, we had to agree every time again and again: the zebra’s were the most bossy and temperamental of the lot. Most animals would kinda try stay out of their way, except the elephants and the giraffes. I think they live with the mantra “sizes counts” and they’re bigger that the zebra’s, so they’re not really fazed by the constant bickering attitude of the zebra’s. 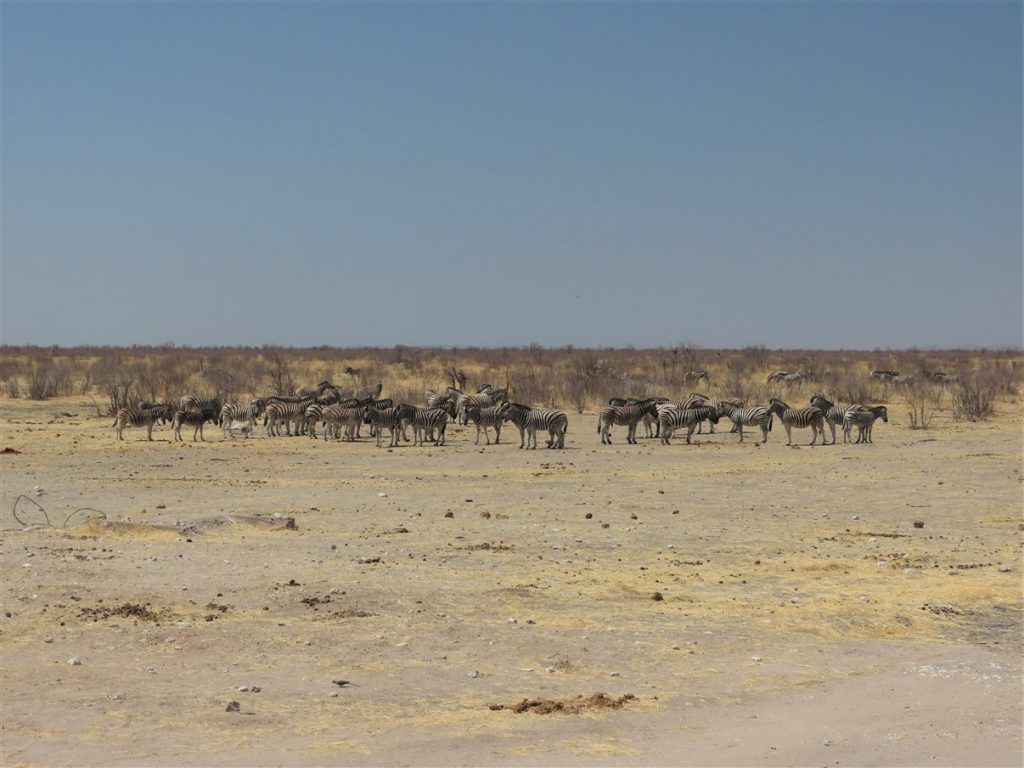 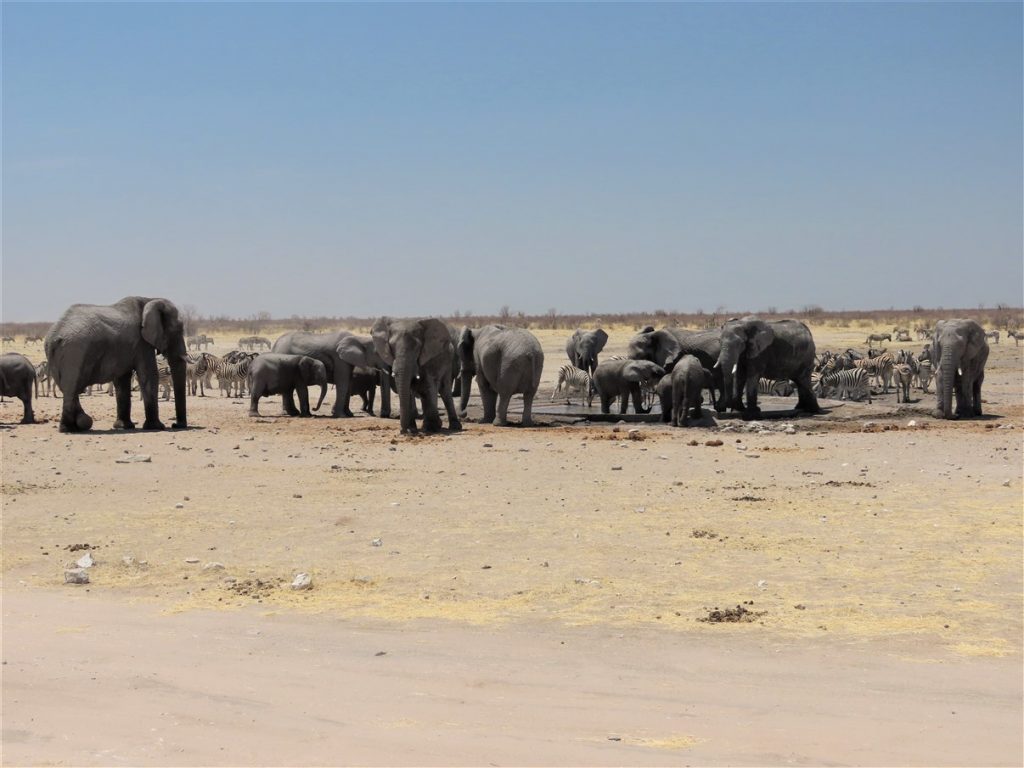 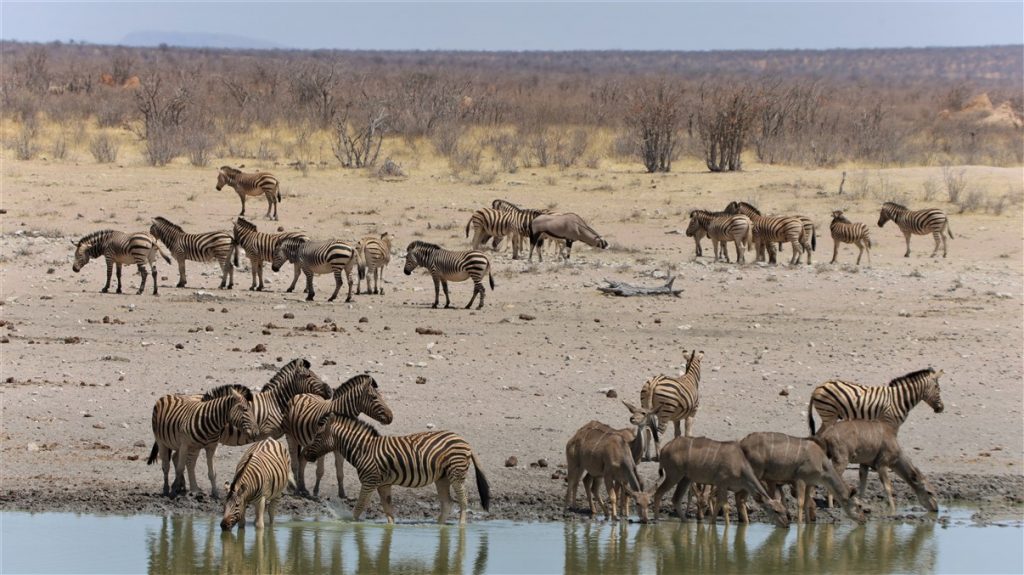 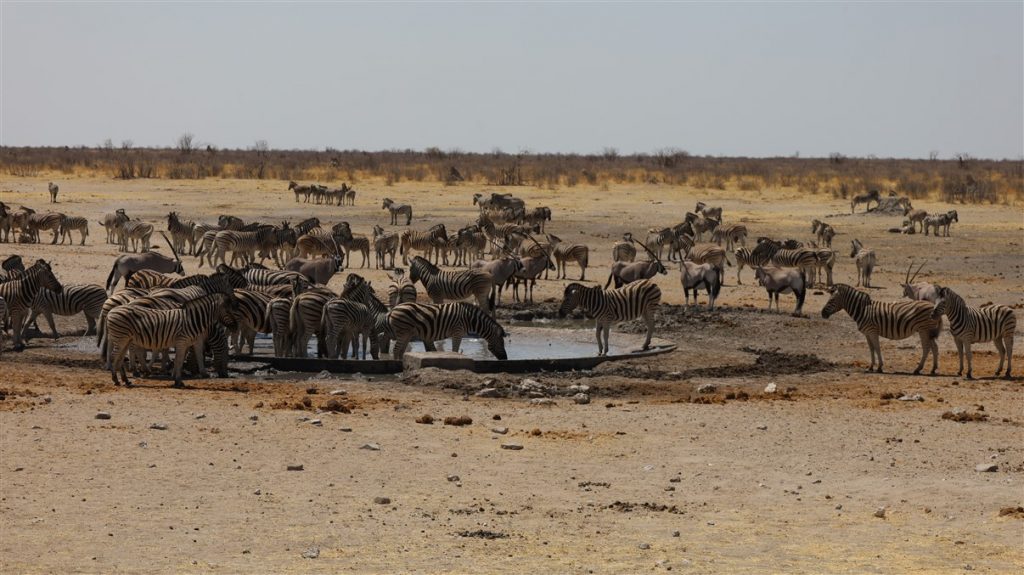 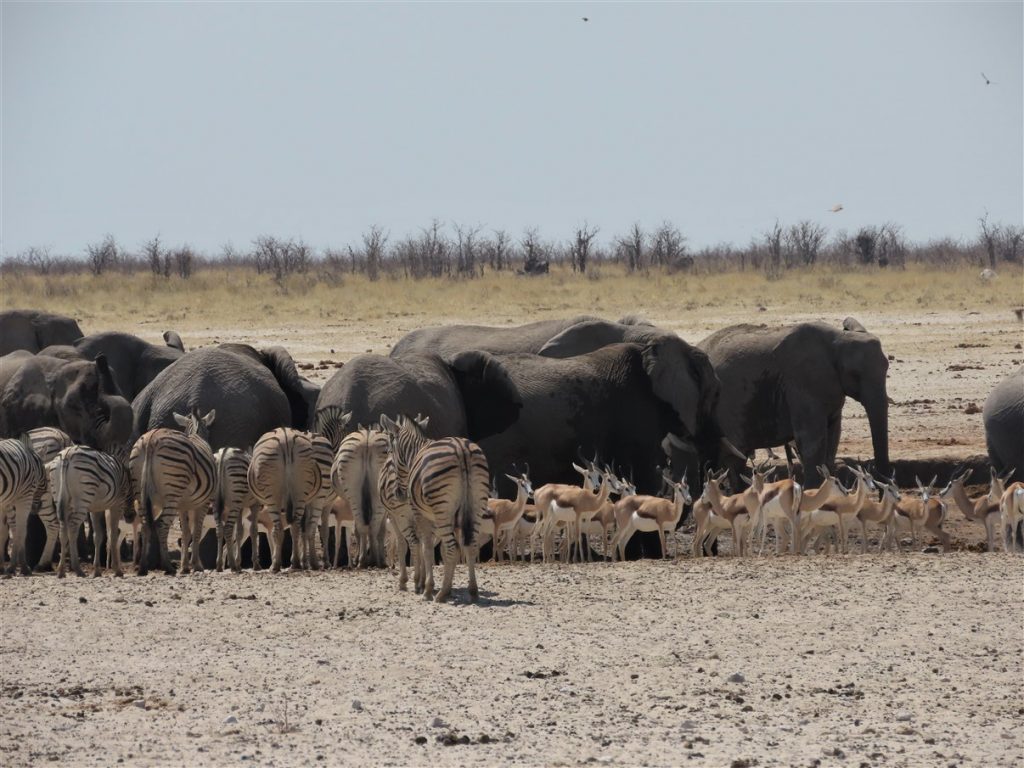 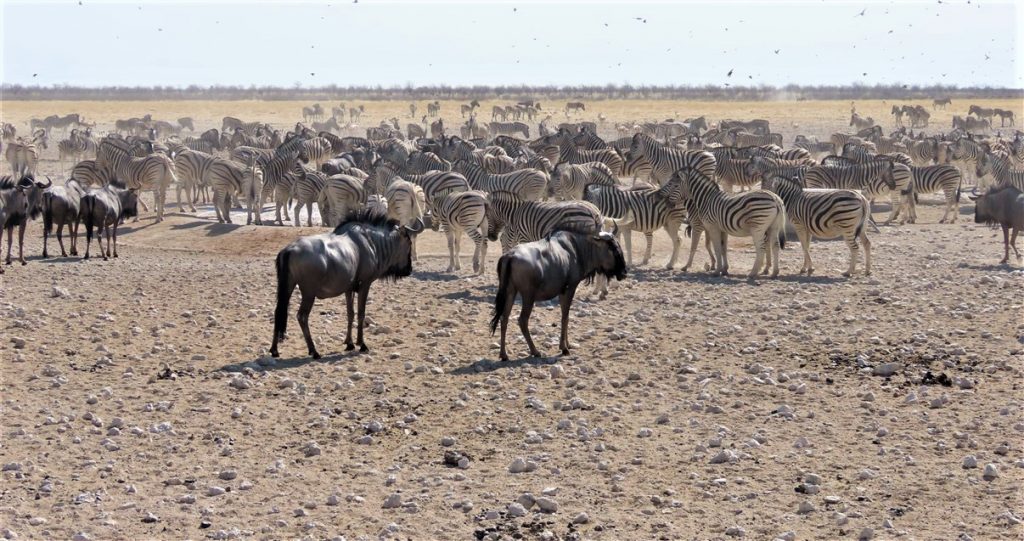 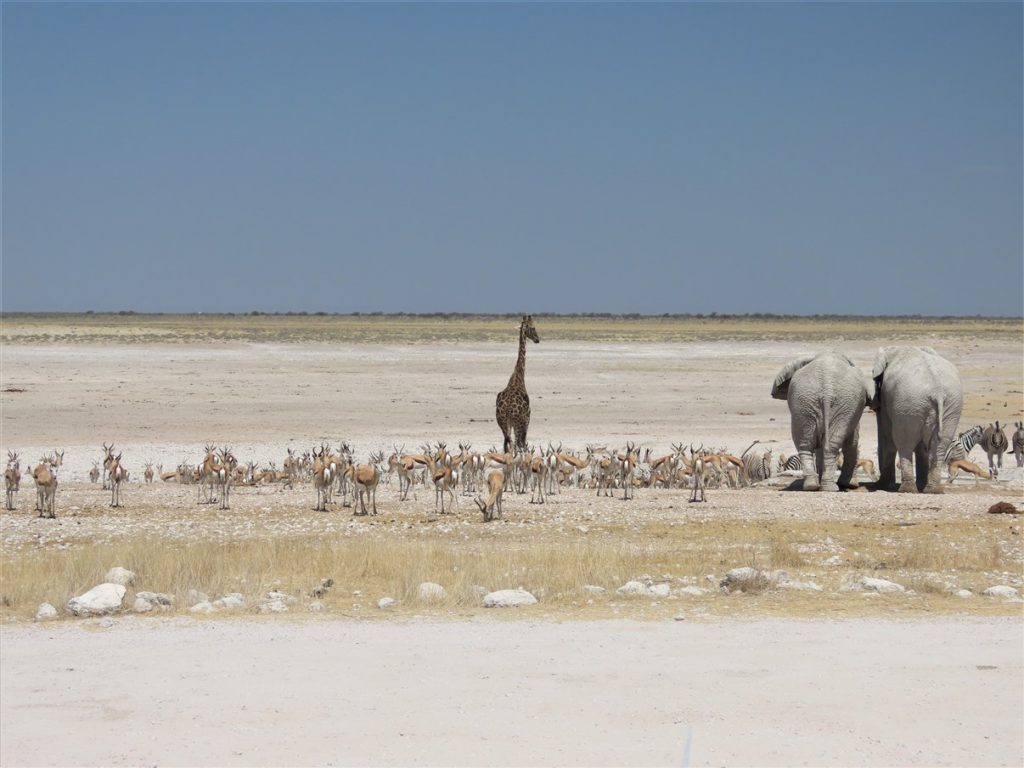 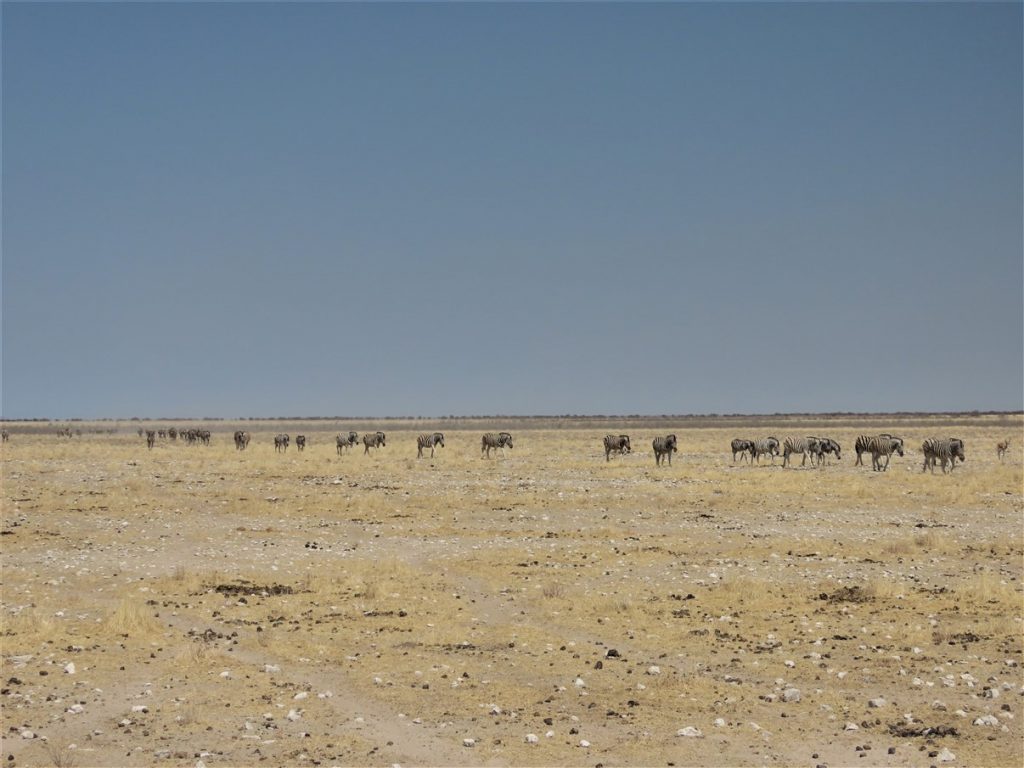 We were able to spot a cheetah without help! Except the time we spotted a leopard in Kruger all by ourselves, most other viewings of cats are when we see vehicles concentrate somewhere along the roadside. During the first few days in Etosha we had seen some lions, which we have realized, are not too elusive. Although their colouring blends amazingly with the yellow grass lands, they often find a spot to sleep not too far away from the road side. So yes we had seen a few.

This one lot we saw reasonably close by consisted of two males and two females lazying about under a tree, until one of the females got up and made an attempt to walk away. Nobody followed, so she came back. A while later she made a second attempt and the two males decided to follow her. The second female stayed put and after 5 or 10 minutes she started this deep roar that trembles through the air. As we don’t know what different nuances of roaring could mean, we wondered if she was calling after the three that had walked away. We guess that perhaps we were right, because about 10 minutes or so later, they all came back and went to sleep under the tree again.

A short while later, the lioness that had stayed behind got up and started walking away in another direction and one after the other, the three others followed, walking away through the grasslands and disappearing into the distance.

The second lot we saw (bottom two photos) was on our way back to camp in the evening. As every “cat” viewing is the most sought after viewing in any game park, you want to spend as long as possible with them. I think that night we made the closing time of the camp gate with only seconds to spare.

They were a bunch of reasonable young lionesses and they looked a bit more ferocious than the other four we had seen. Although they were lazily lying on the road, they were alert and their eyes had a bit of a mean streak. 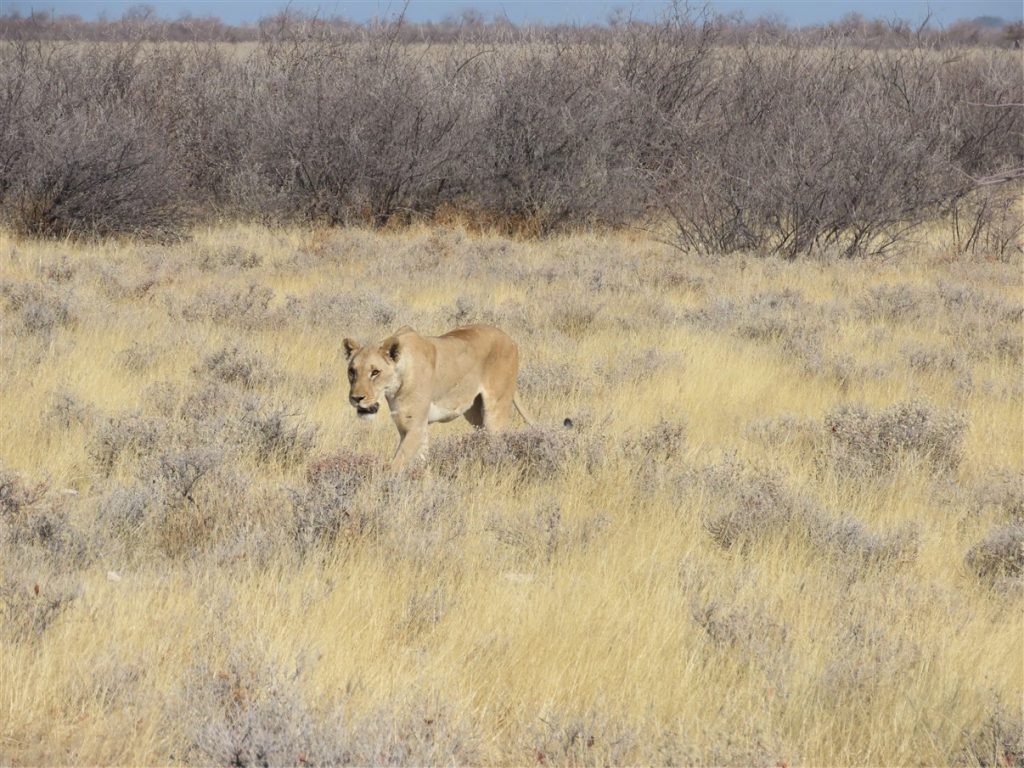 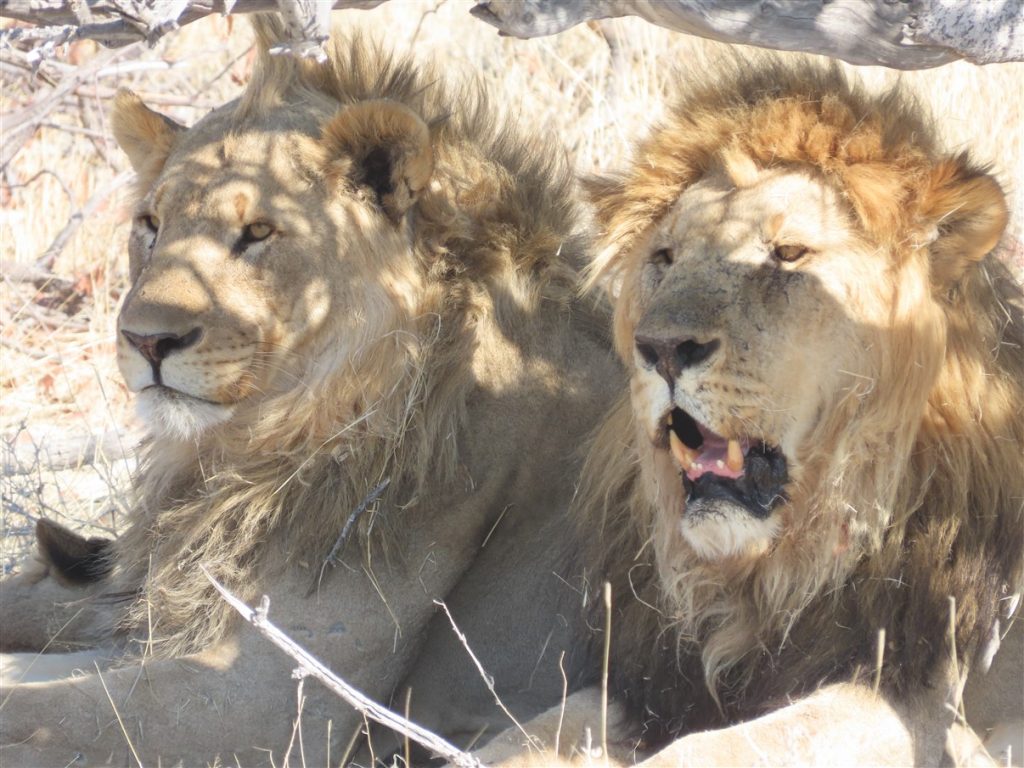 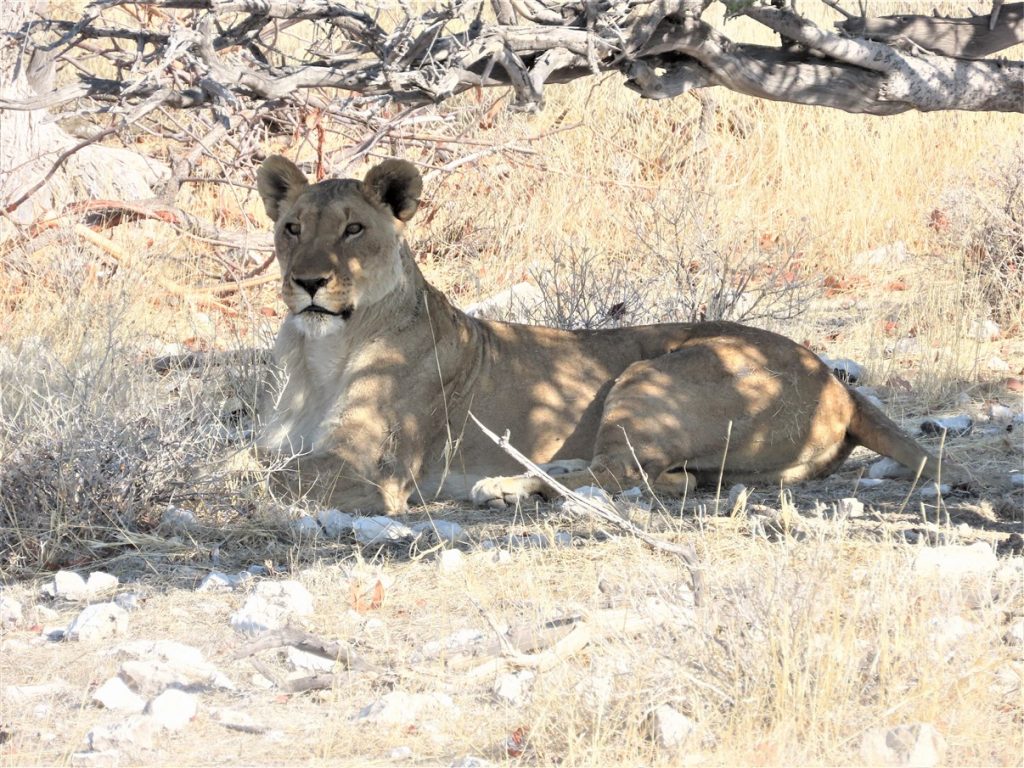 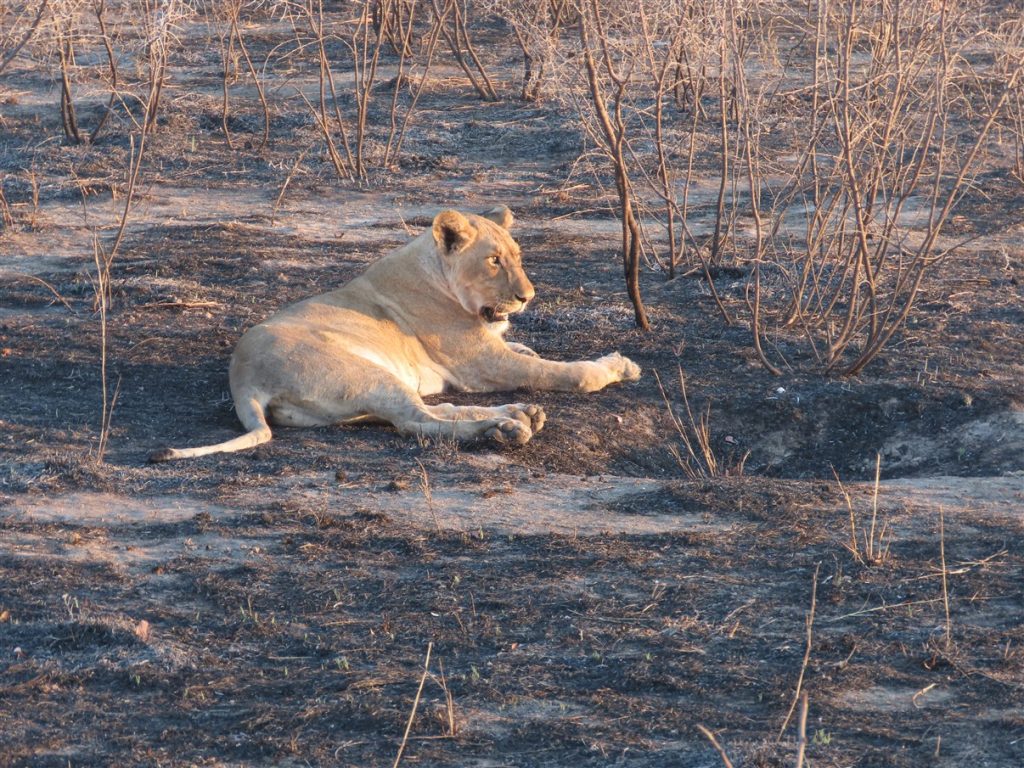 But cheetah and leopard are a whole different ball game!  And then, one afternoon, we had split up from Gavin and Lee and they were ahead of us. Out of the corner of my eye I saw movement on my right and before we knew something spotty walked out of the bush. In my excitement to make Stefaan stop the truck, I kinda mistook the cheetah for a leopard and yelled: “Leopard! Leopard! Right! Ahead! Bush!” And the cat quietly crossed the road into the bush on the other side. Because it happened so fast, there was no time for elaborate photo preparation and we shot from the hip! Looking at the photos later, we though we could detect a red tinge on the fur around her mouth and it looked as if she either just had a seriously good meal, or she was pregnant: she had a nice fat tummy!

In the meantime Stefaan had called Gavin on the two-way radio to return and a few minutes later they joined us again. By then the cat unfortunately had gone down into the grass for a short snooze, but when she eventually got up to walk further, Lee confirmed it was a cheetah and not a leopard! Even more exciting, because cheetahs seems to be even more elusive than leopards.

When she started walking away from us through the veld, it became a game of hide and seek to try find her in the long grass. She eventually disappeared over the last few rises to the pan beyond.

Chatting about this viewing later around the fire, we concurred that our stargazing in Kaokoland must have trained our eyes: we would spend evening after evening staring up at the sky and although our recognition of constellations was limited to Southern Cross and Orion’s belt, we developed a game who could spot most satellites moving across the sky.  I think our combined highest number was about 20 in an hour or two! Thus… our eyes were trained to spot the tiniest movement in the corner of your eye… and we got our cat! 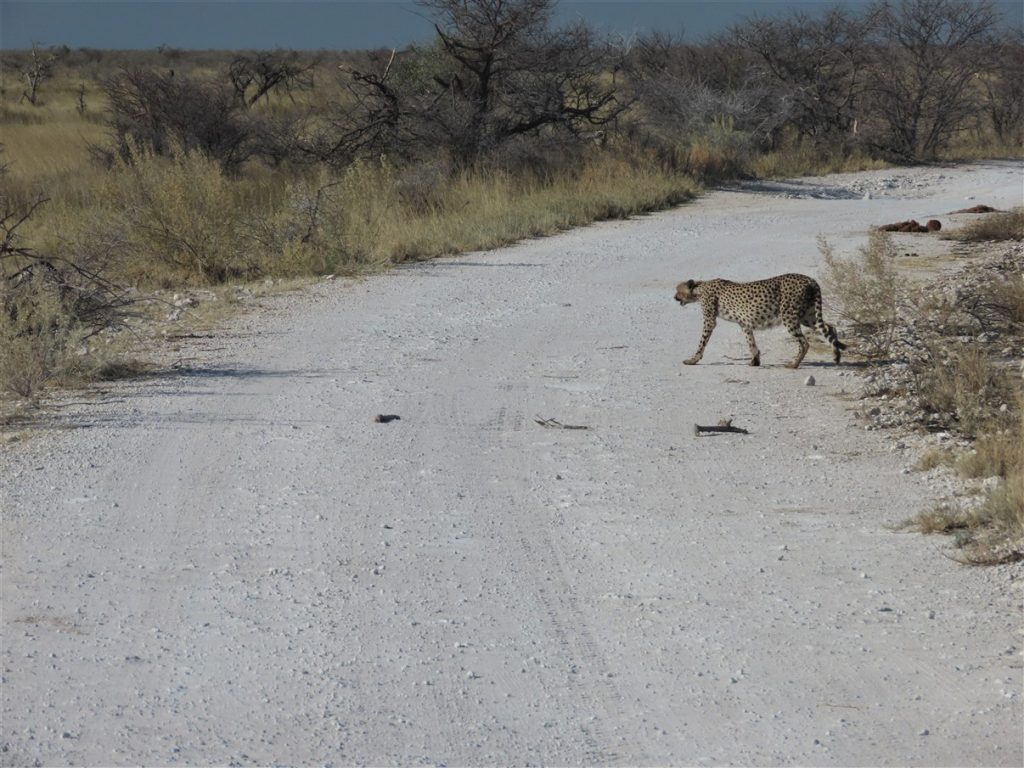 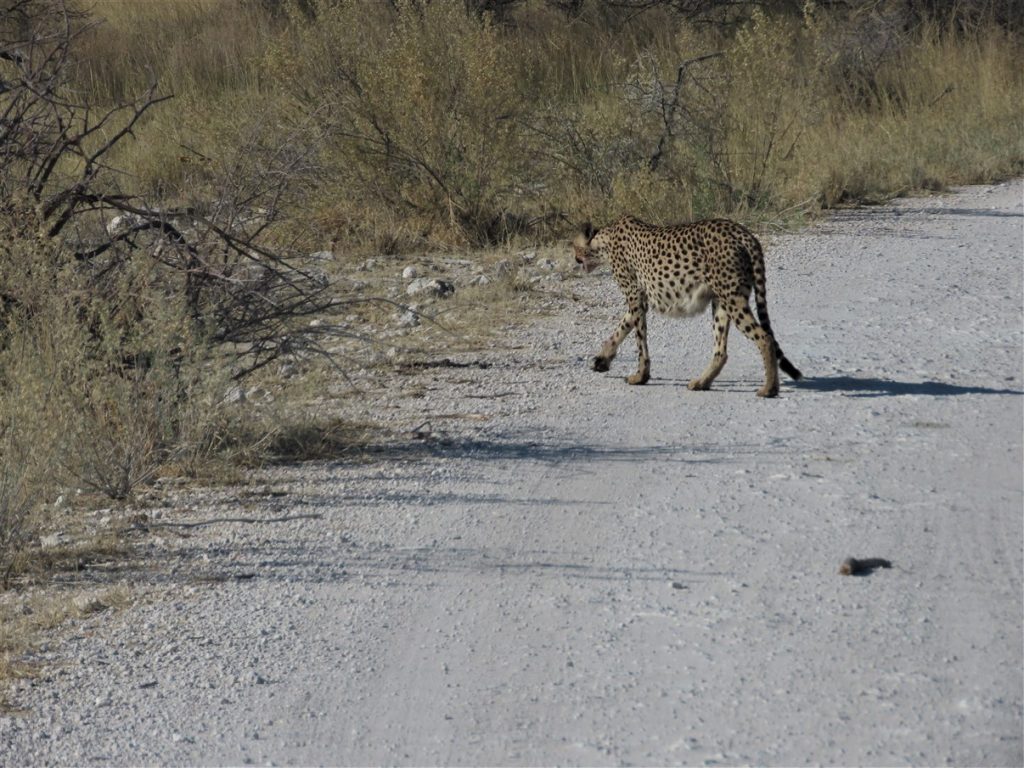 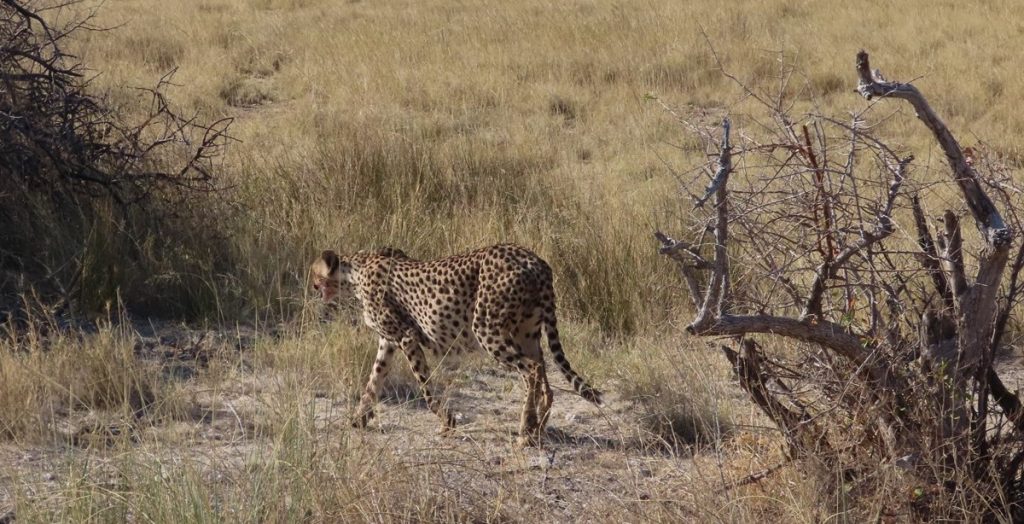 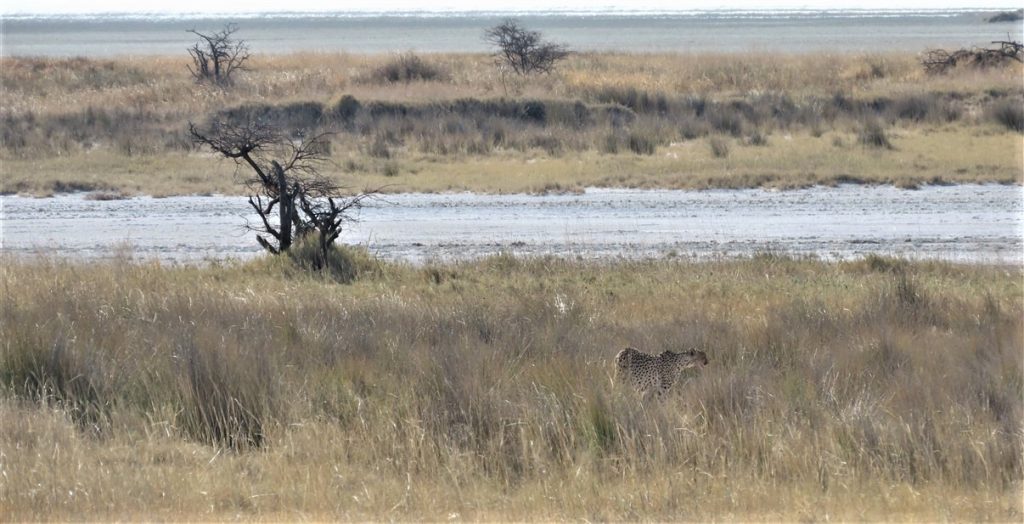 And this was the leopard we saw on our early morning drive. We spotted her first walking into a bush and it was a bit tricky to recognize her between the branches. She eventually got up again and walked back to the road , aiming for the waterhole on the other side. While we had spotted her first, there was unfortunately a car with what looked like a professional photographer next to us and he eventually jostled and cut in front of us the get the best photos and video. He also didn’t hesitate to tell us to switch of our engine while he was filming. Not the most enjoyable encounter.

The leopard eventually disappeared into the direction of the waterhole but never showed up there. It was only a while later that we saw a whole heap of cars congregating under a tree a bit further and when we joined the crowd, we could see her perched onto a branch.  She was not in the least interested in the spectacle below her.

Luckily we are a bit higher than most vehicles so we still have a great view even when we stand in the second row.  The crowd systematically grew and eventually the leopard got tired of the whole paparazzi thing happening on the road and she eventually climbed out of the tree and disappeared in the bush. 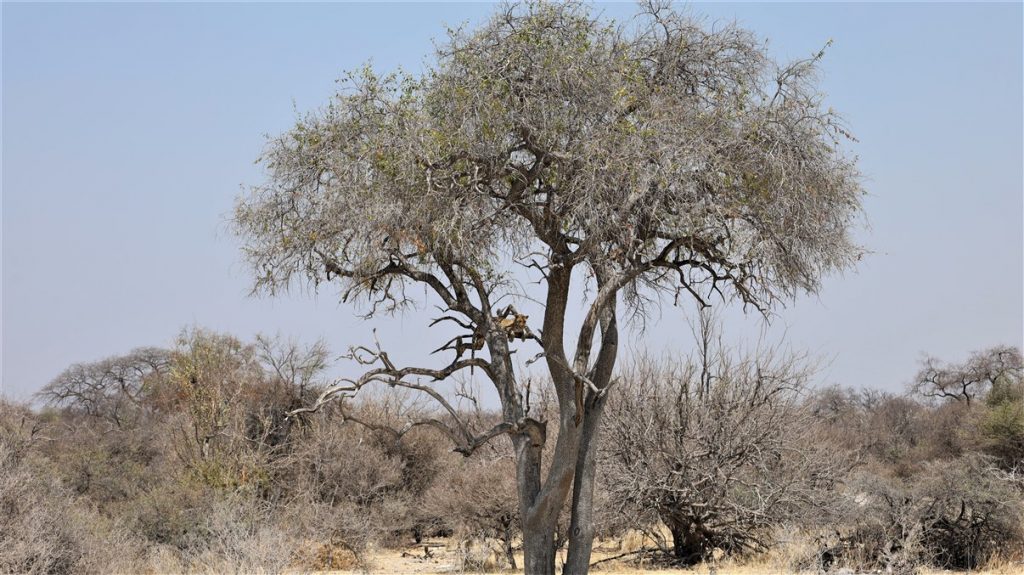 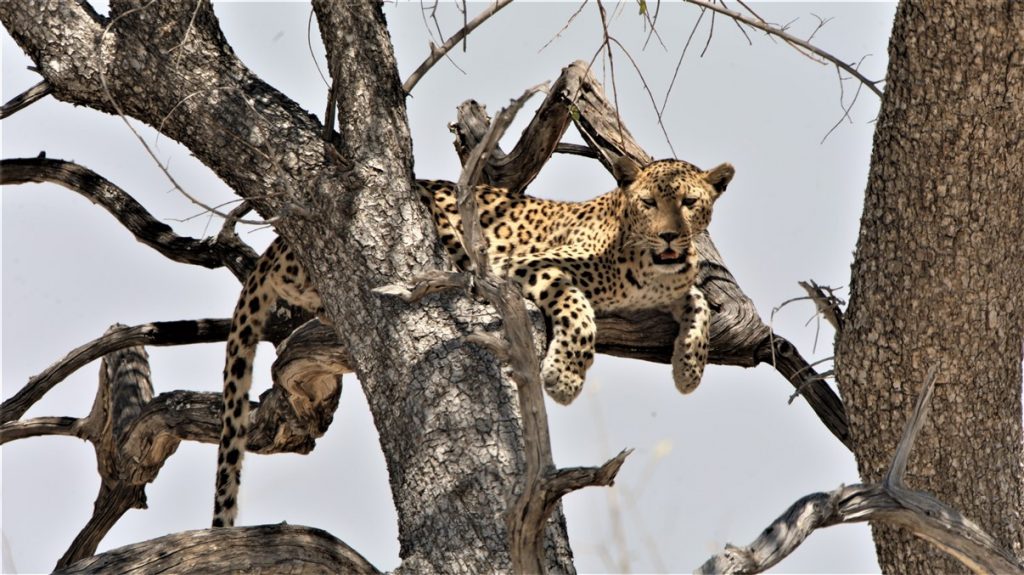 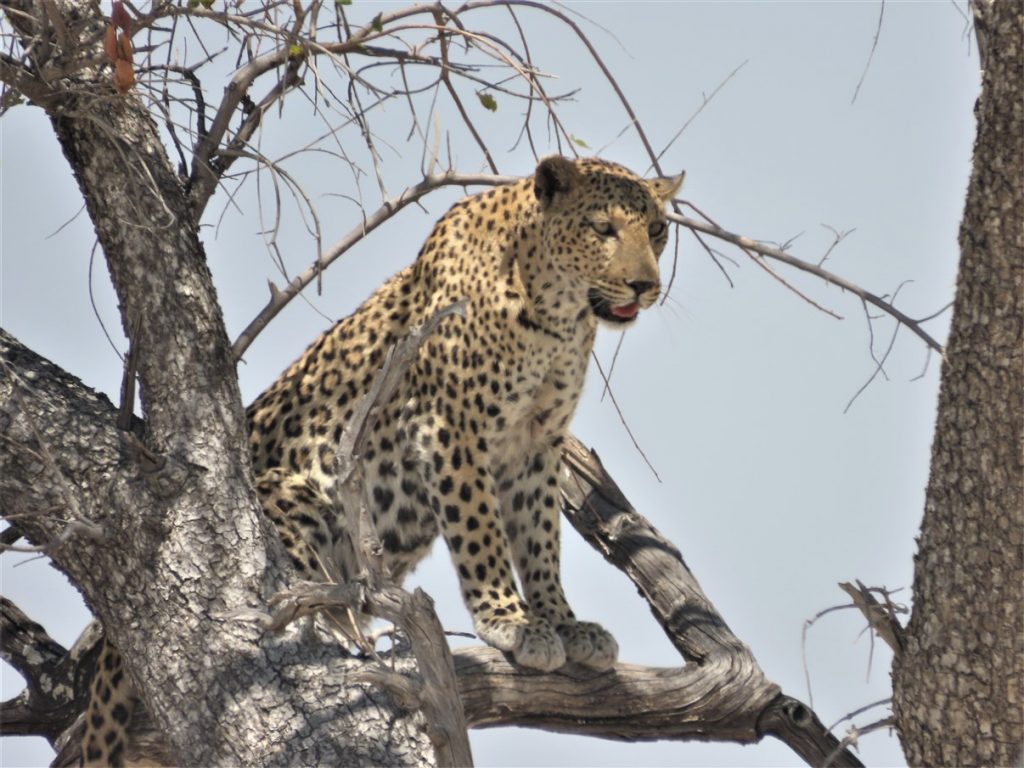 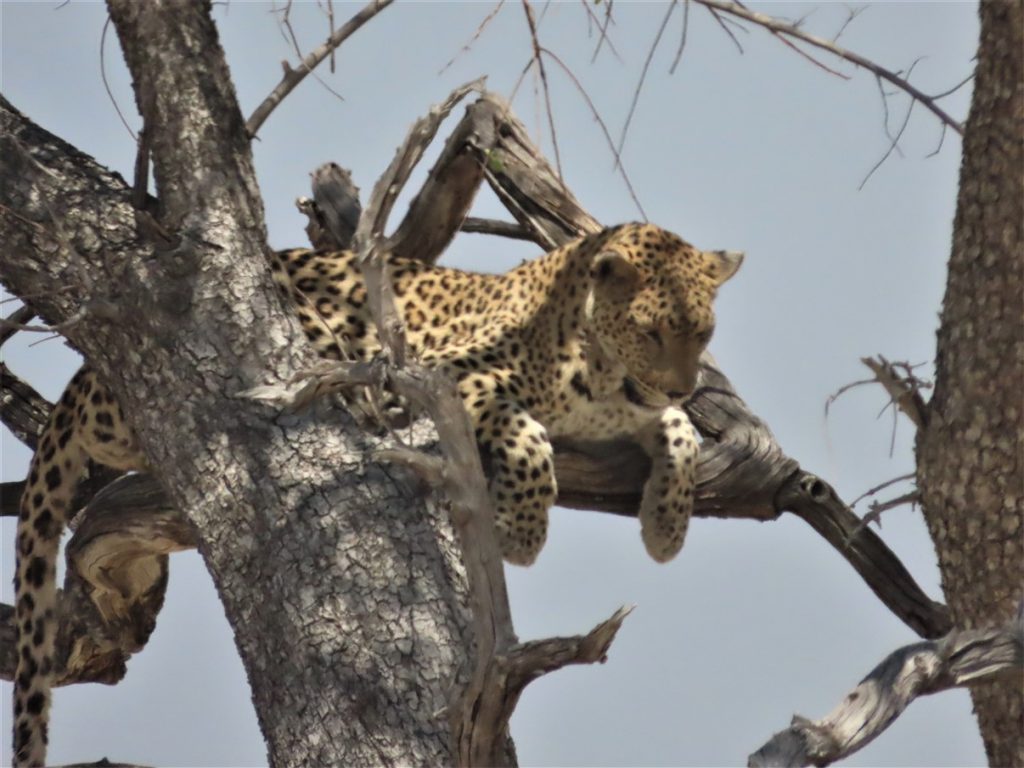 Next episode: more about the Etosha pan and the amazing landscapes!