A new year and heaps of new year’s resolutions, one of them trying to get up to date with our stories. I  stopped writing for a Christmas break with our daughter and her family visiting from Jamaica and our last few stories of 2020 never made it to the blog.

Between camping in front of my sister’s house in Durbanville and sorting out stuff at Somerset Mall (bank and other stuff), we decided to visit the Bo-Kaap, the historical Malay quarter in central Cape Town. Although negotiating narrow roads and steep up hills with our big truck was a bit tricky, we eventually found a parking spot, got out and started our walk through the colourful quarter.

While admiring a vintage VW Beetle in pristine condition, we saw a sign on one of the houses that peaked our curiosity: “This heritage site is under threat”. We hailed a local resident who was more than happy to relay his (and his community’s) frustration with official bodies regarding the preservation- or lack thereof- of this historical precinct. 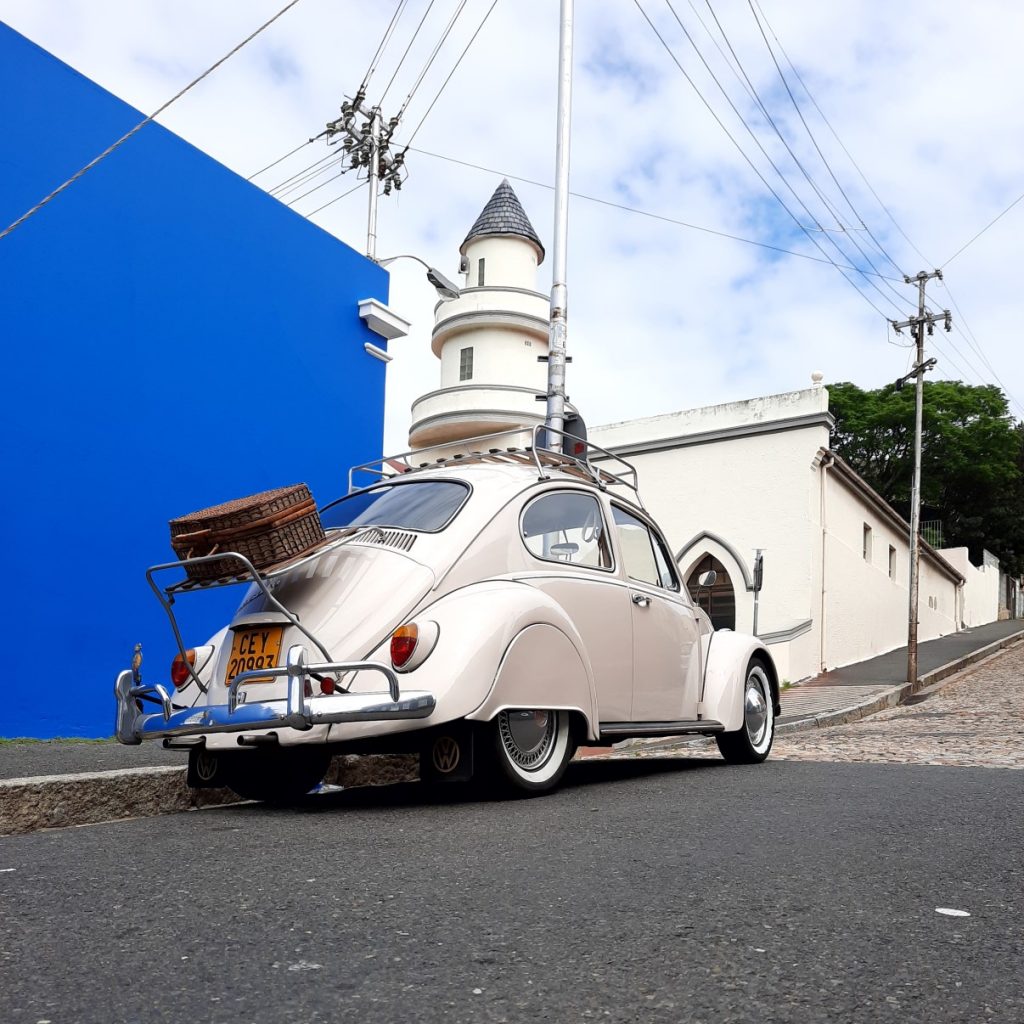 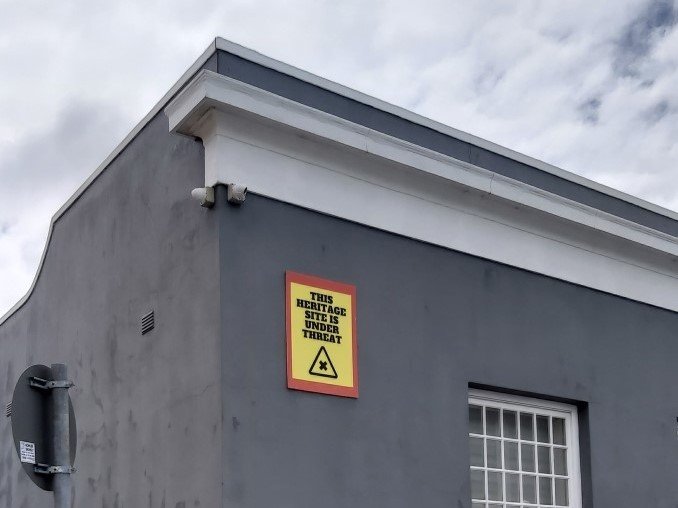 We popped in at a local art gallery and continued our walk through the colourful streets: soft ice cream colours alternated by vibrant magentas and chartreuses. It is heart warming to see how much effort the local community puts into the beautifying of their houses and precinct. From painted patterns and mirrored mosaic house numbers to colour coded paintwork to match the flowers. On various walls in forgotten nooks and crannies we saw some really awesome murals. 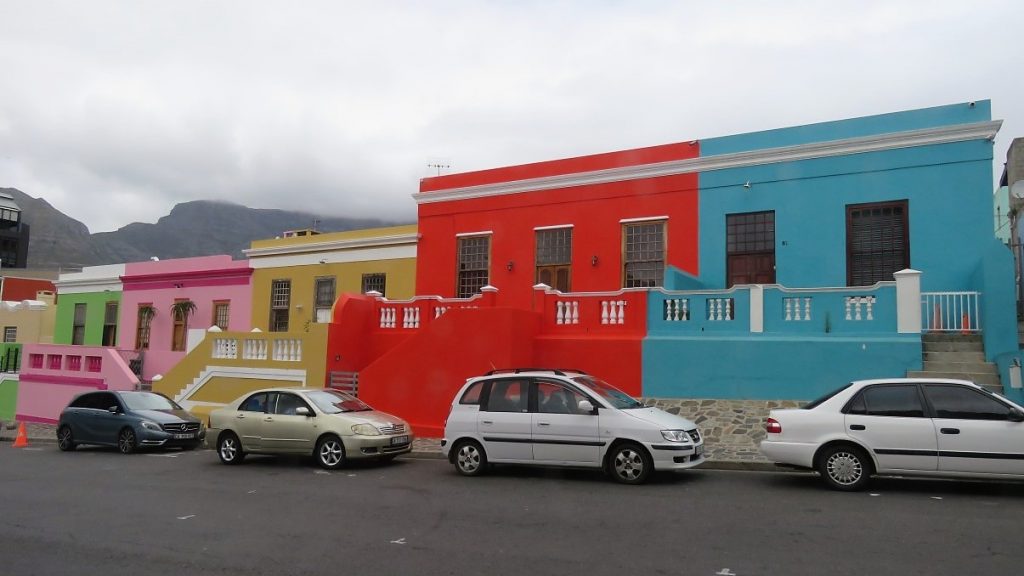 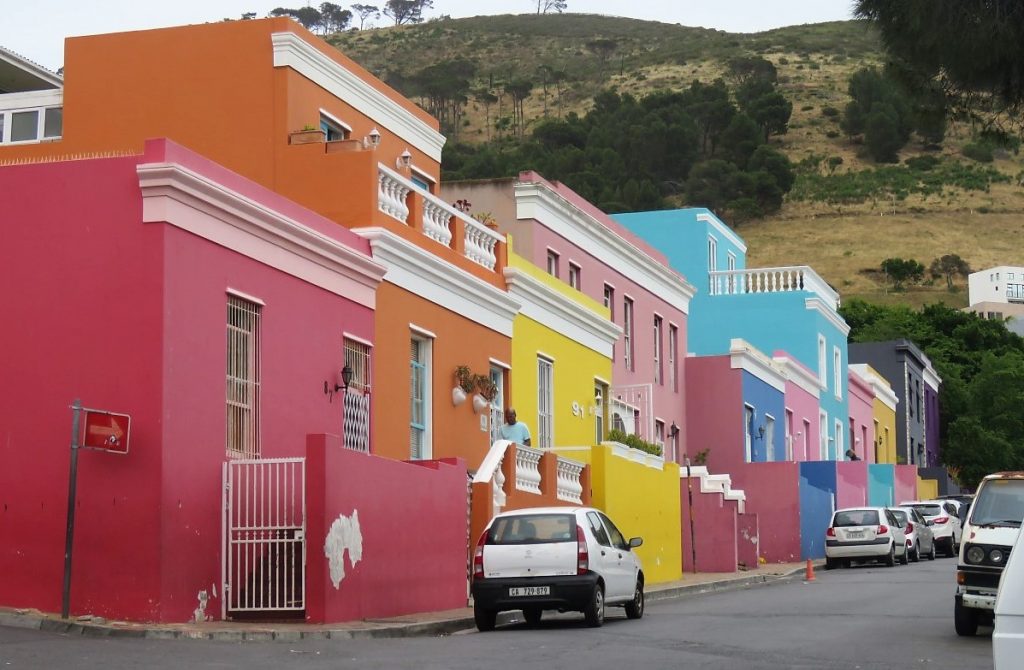 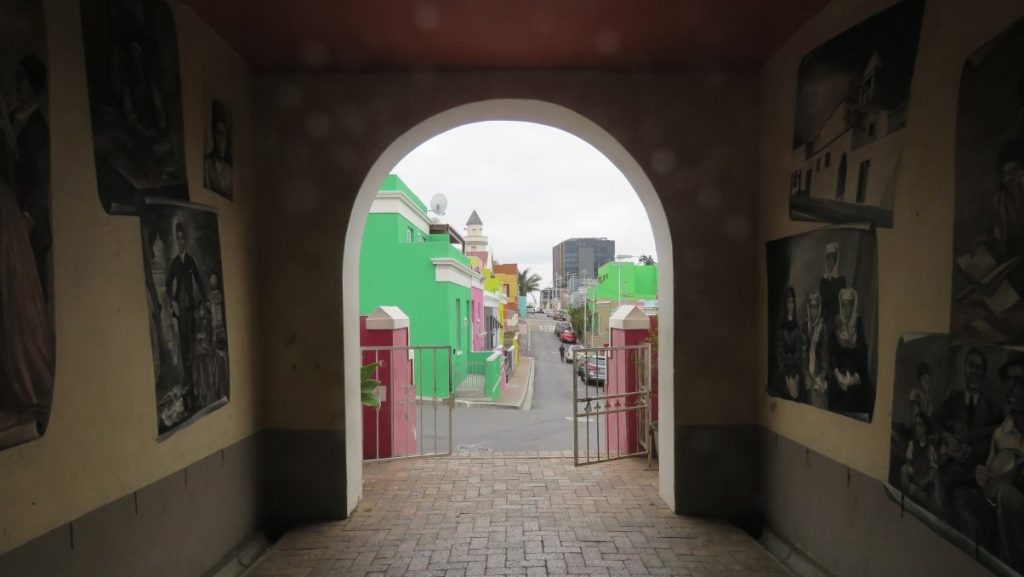 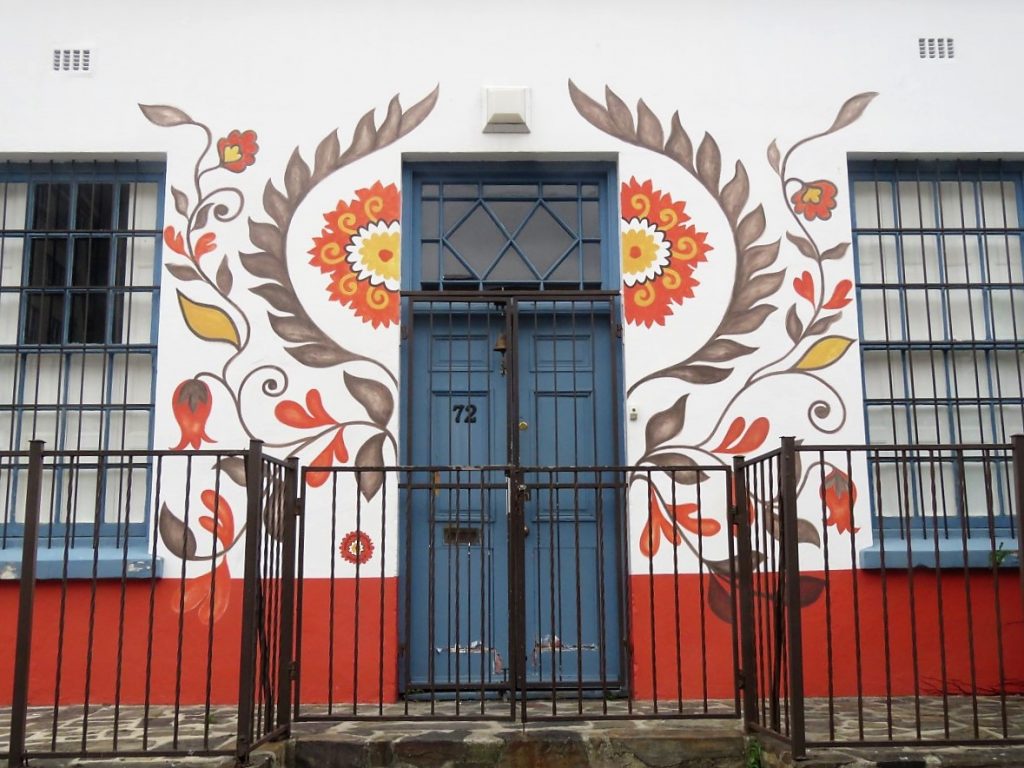 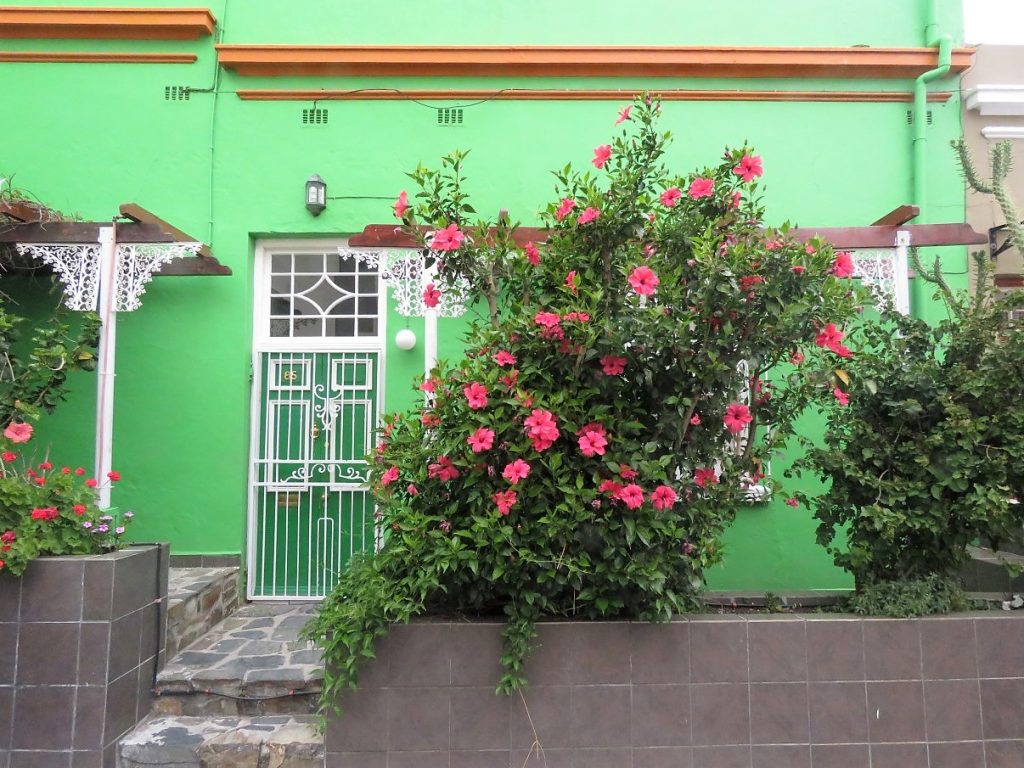 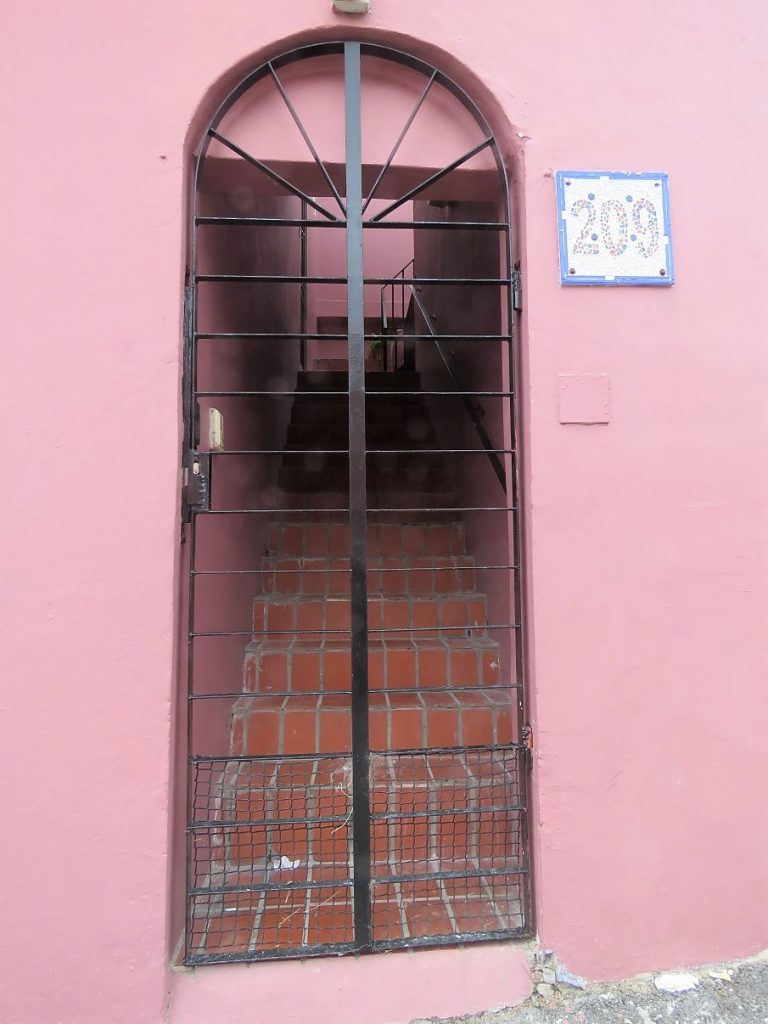 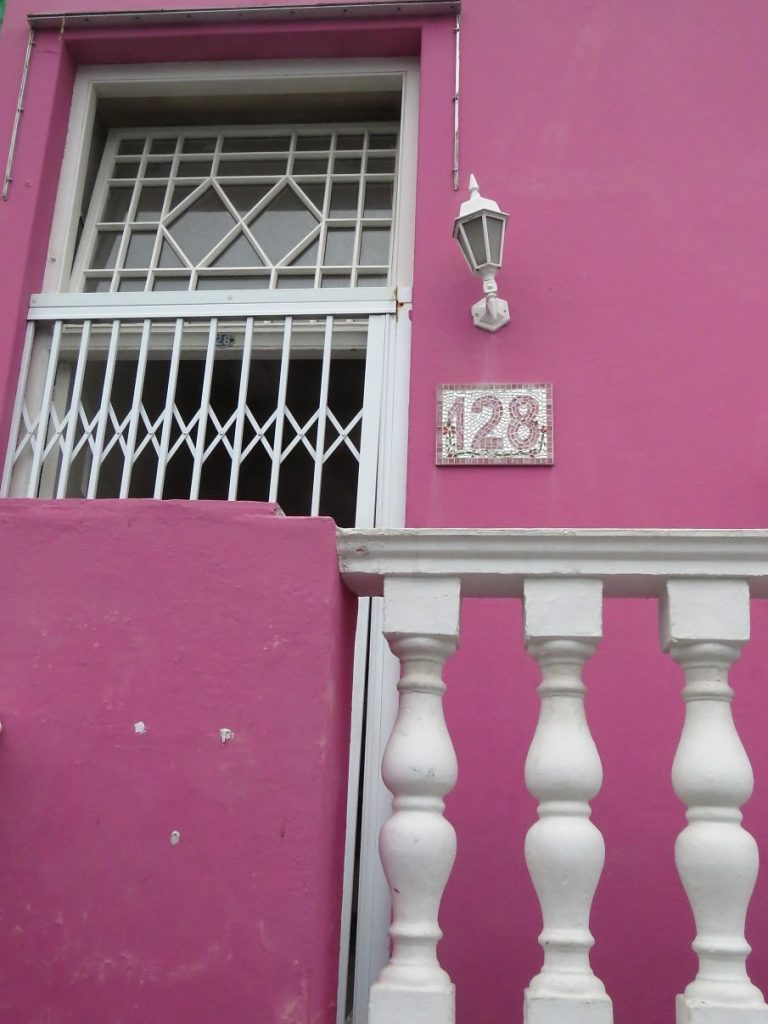 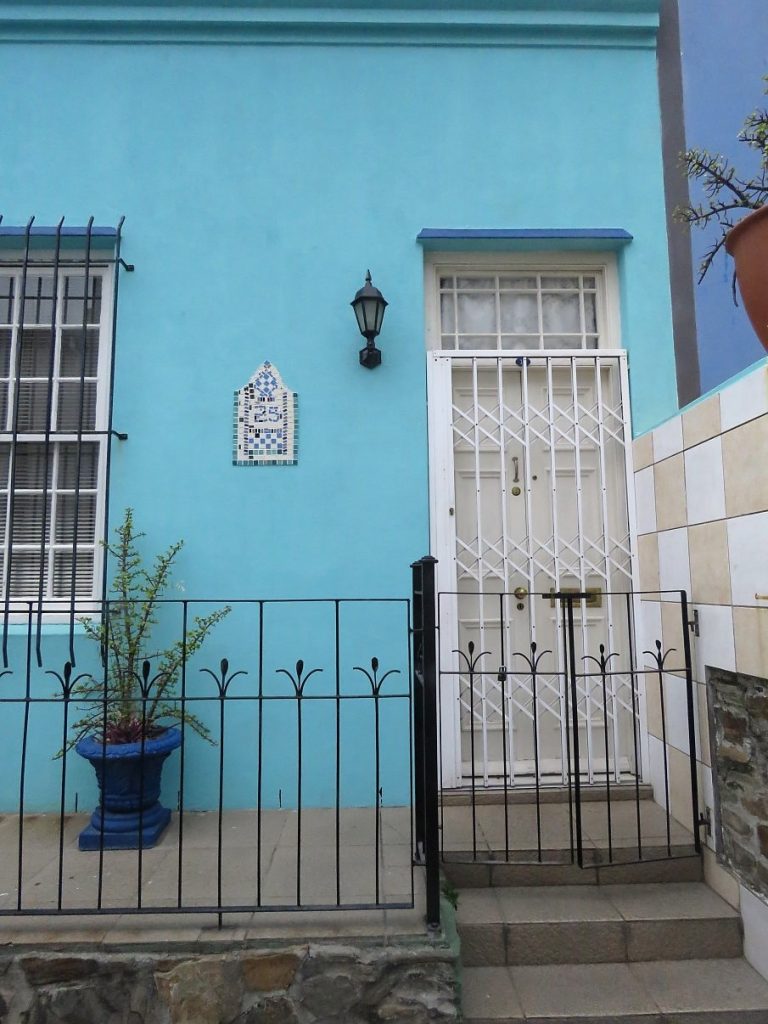 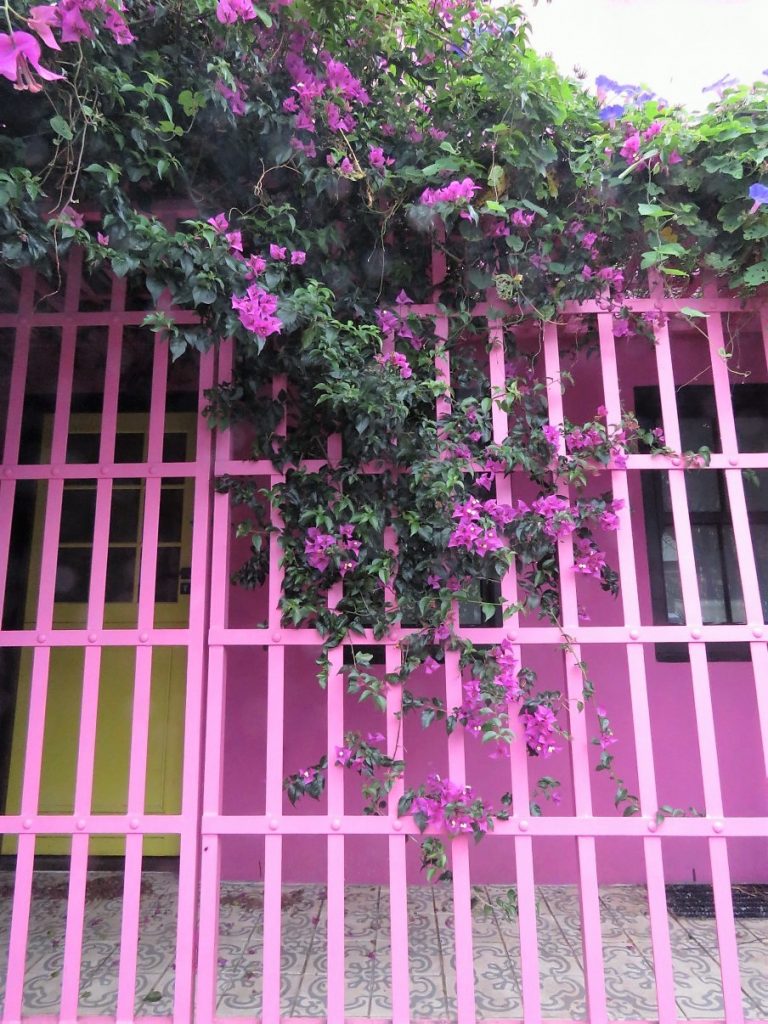 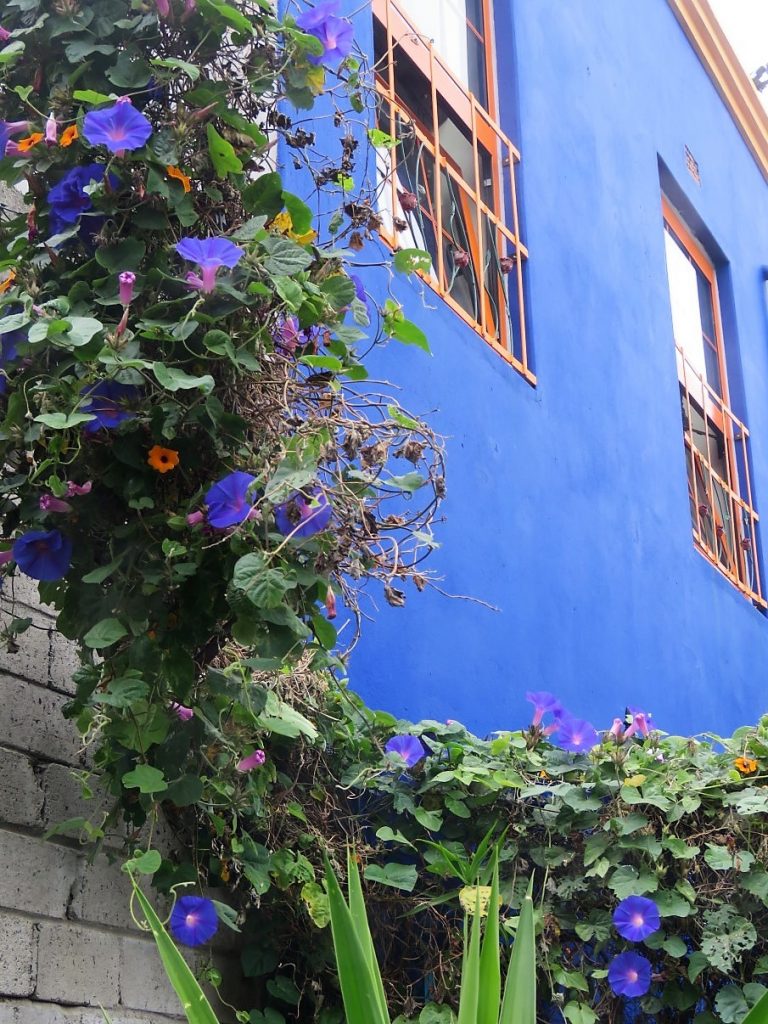 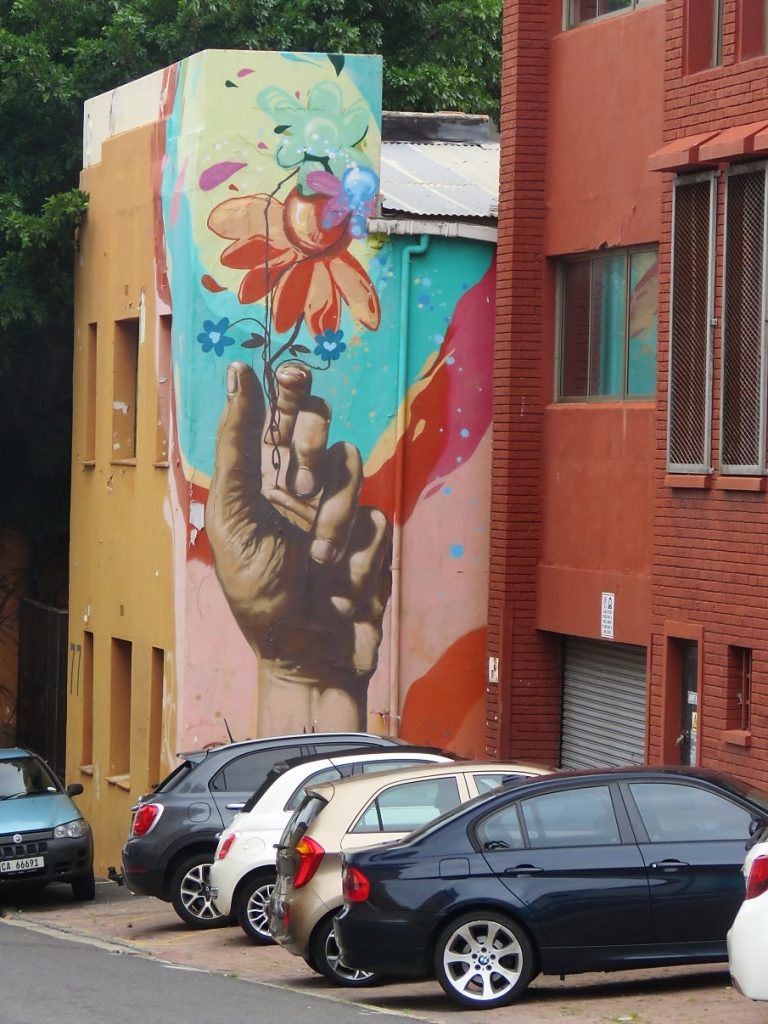 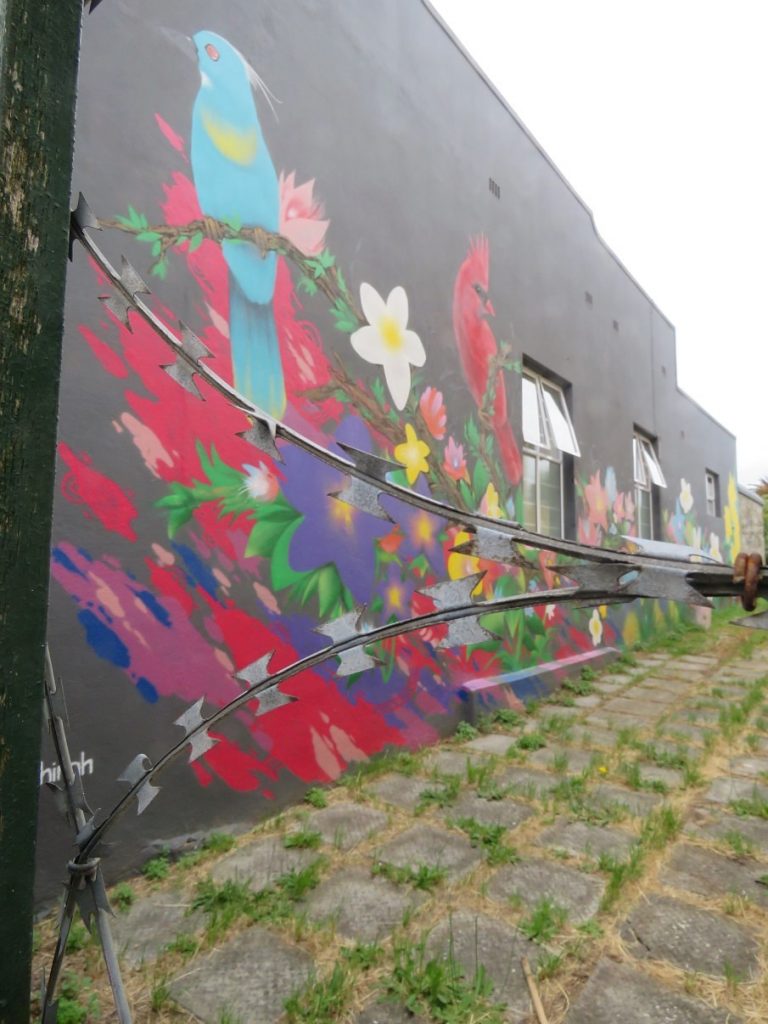 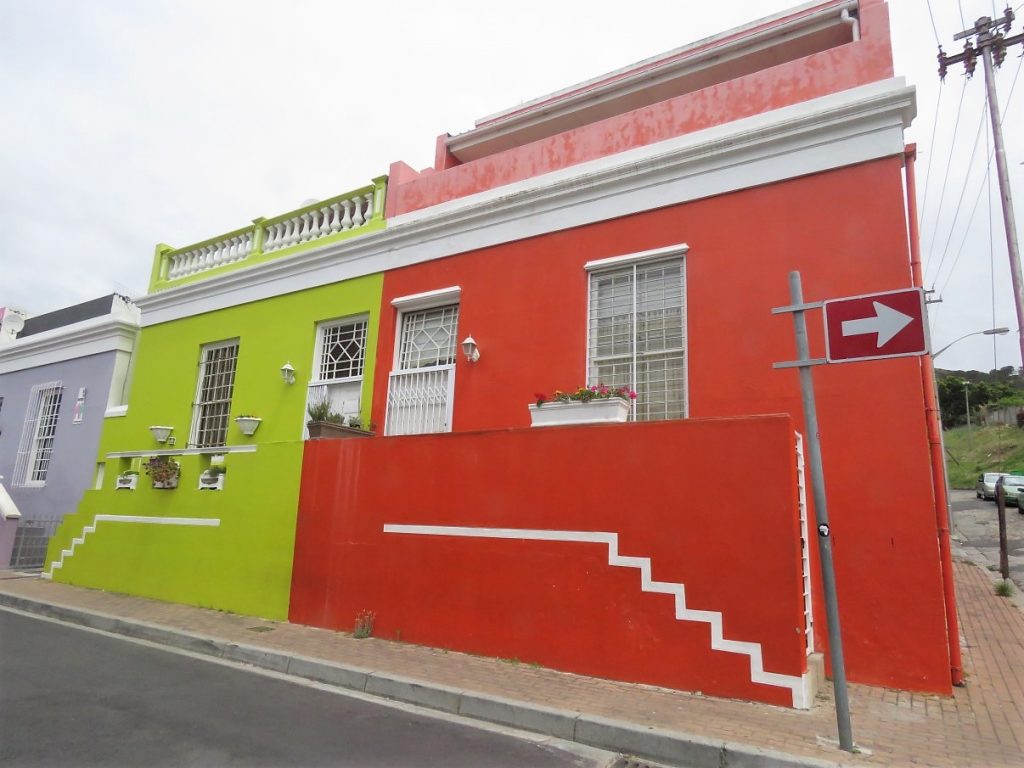 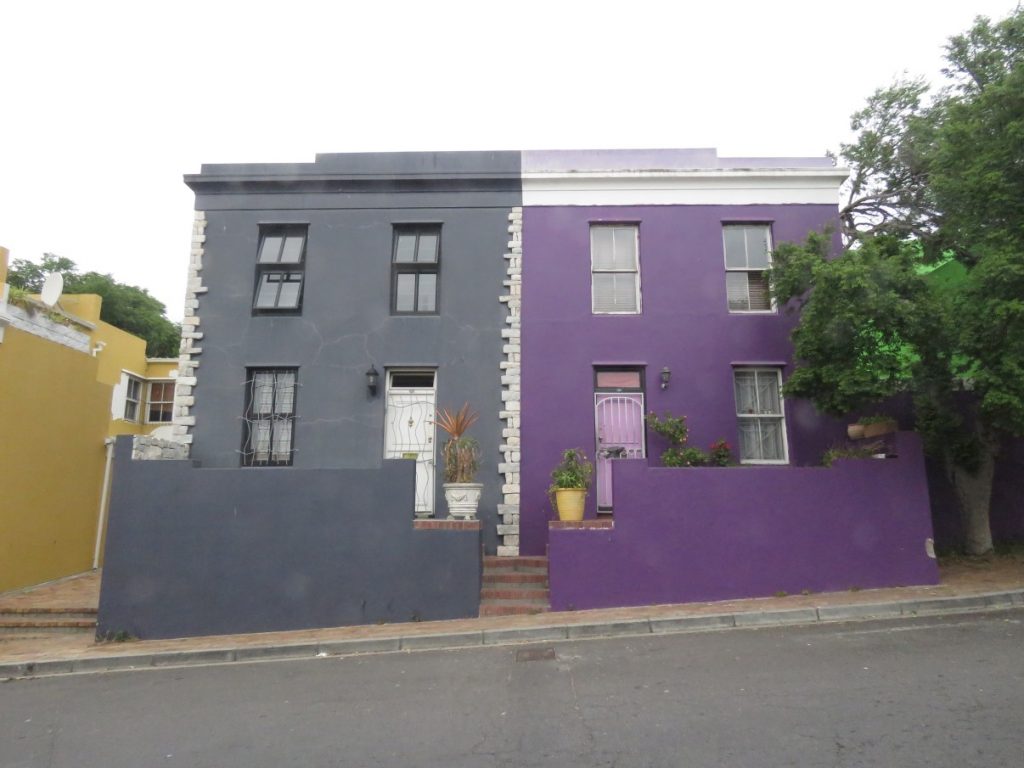 Earlier we had walked past a tiny restaurant in Rose Street- Ahmed’s Tikka House- where the smells had just been amazing and we decided to have lunch there: cheap and simple but very tasty. The owner told us how long he had been in business and explained where it had all begun. Where the blue canopy house is on the painting is where Ahmed’s Tikka house is now. But he actually started further up the street on the corner. Even though we were the only customers inside the tiny restaurant, there was a constant flow of customers at the outside counter for take-aways. The restaurant was a quirky mix and match of interesting furniture, a homely collection of pot plants and food that was unpretentious but great. It must have been the perfect spicing of the food because Stefaan (who usually likes it much hotter than me) was quite happy with the dish and I actually could work my way through the spicy chicken without losing all my taste buds! Great cooks! 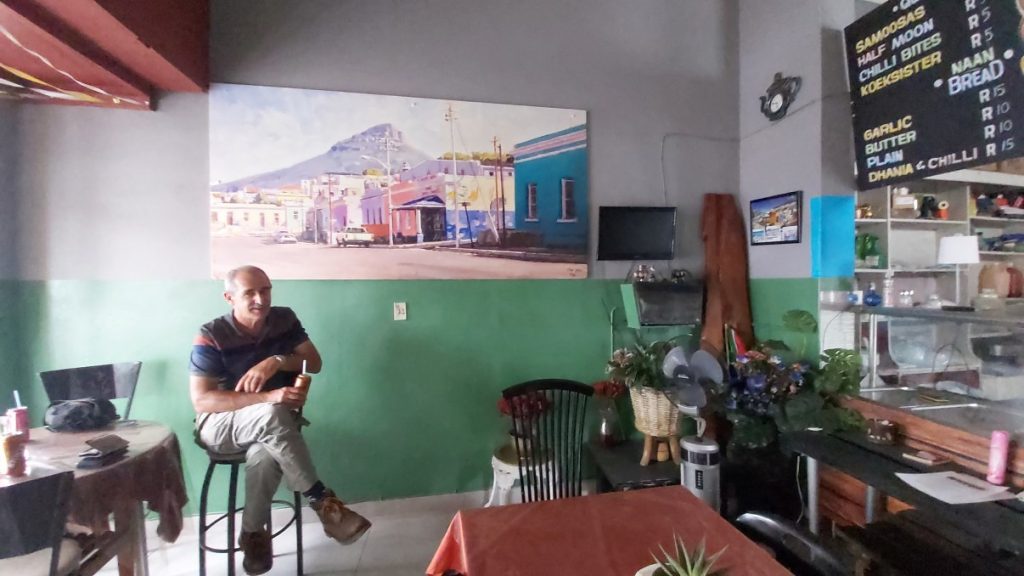 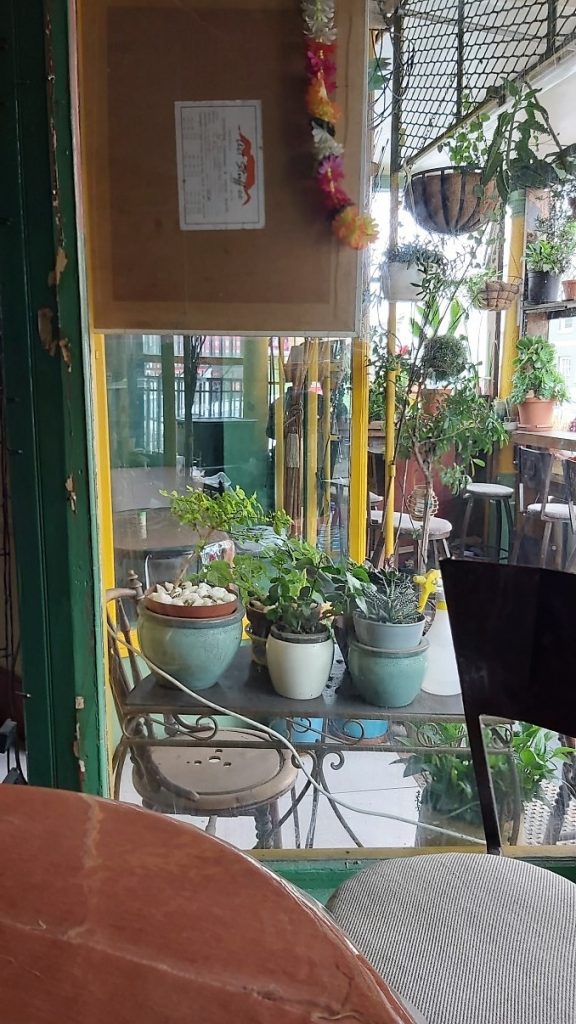 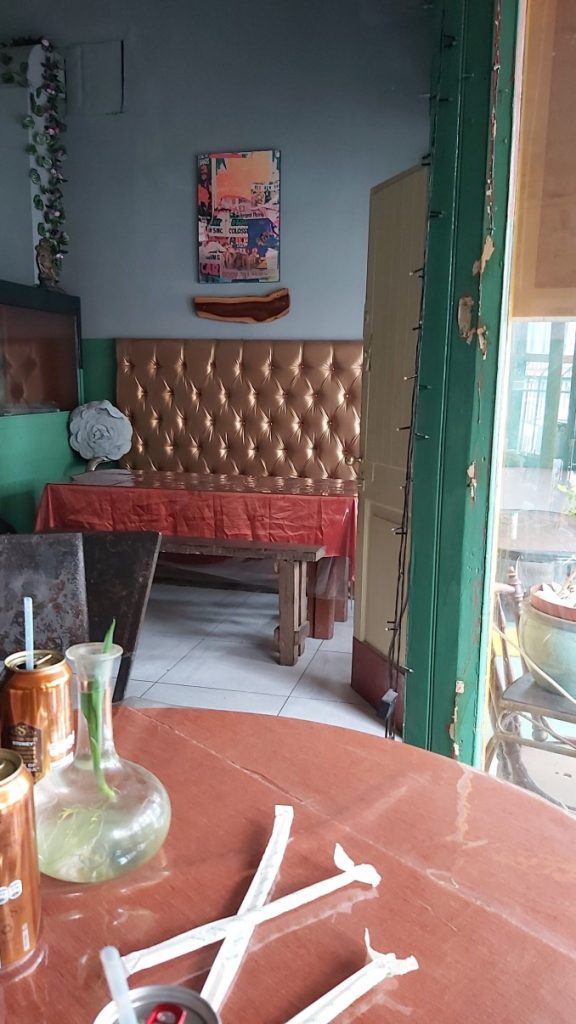 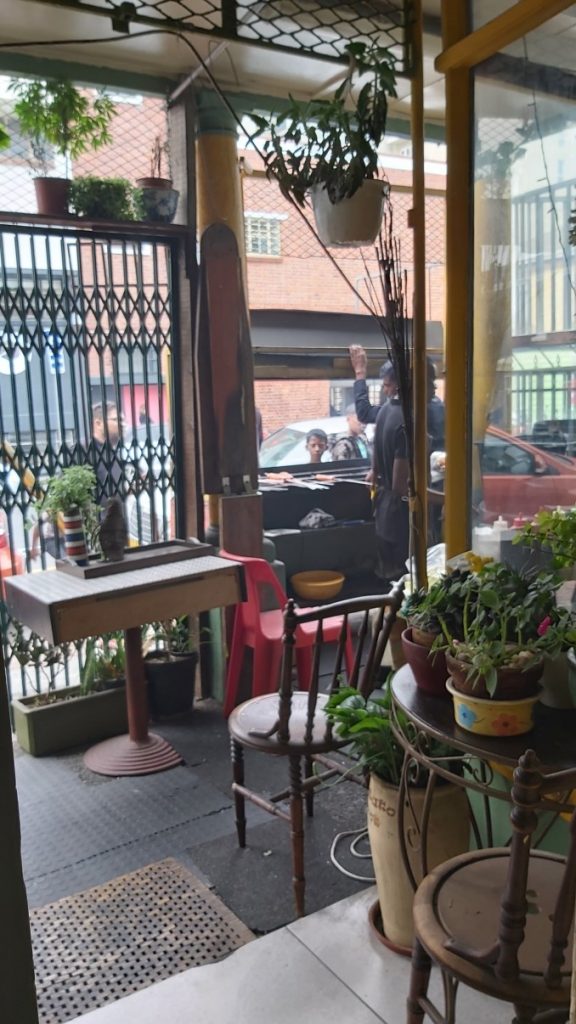 We like curry and seeing the prices were very reasonable, we ordered take-aways for supper that night. Unfortunately Ahmed’s doesn’t do coffee so, while waiting for the order, we went for coffee to Bo-Kaap Deli on the opposite side of the street, where Stefaan earned his wings.

The artists painting the wings on the deli’s wall explained that it was aimed to be an invitation to take a photo in front of the wings and then put it on their facebook page. 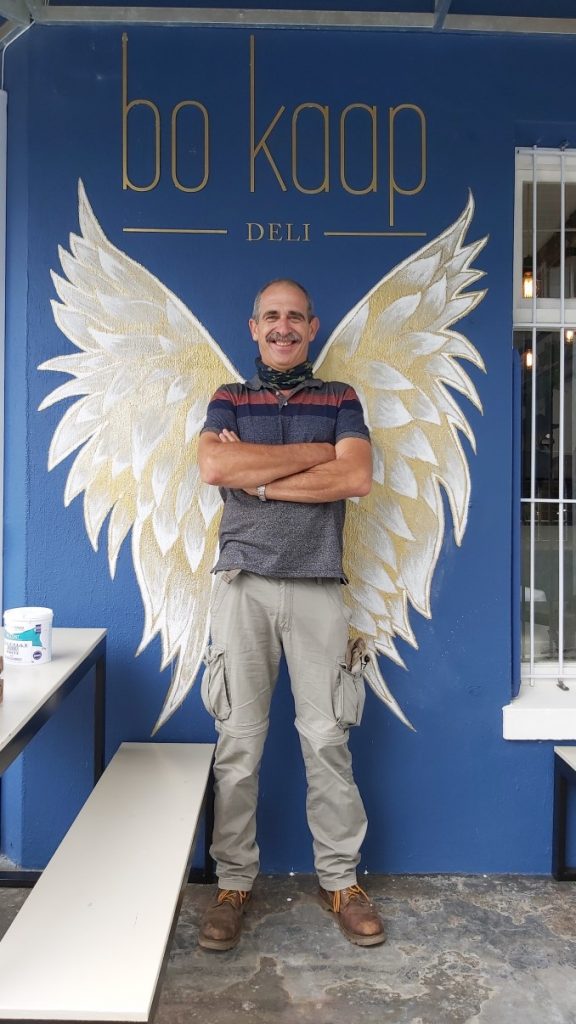 By then we were ready to go and walked back to Trokkie. Stefaan quickly had to get something ‘out of the house’ and while I was waiting for him to come out again and unlock my cabin door, I realised there was broken glass on the ground that hadn’t been there when we had gotten out of the car earlier.

My heart sank when I slowly looked up and saw my window was broken. Put 2 and 2 together and we realised we had had a break-in. 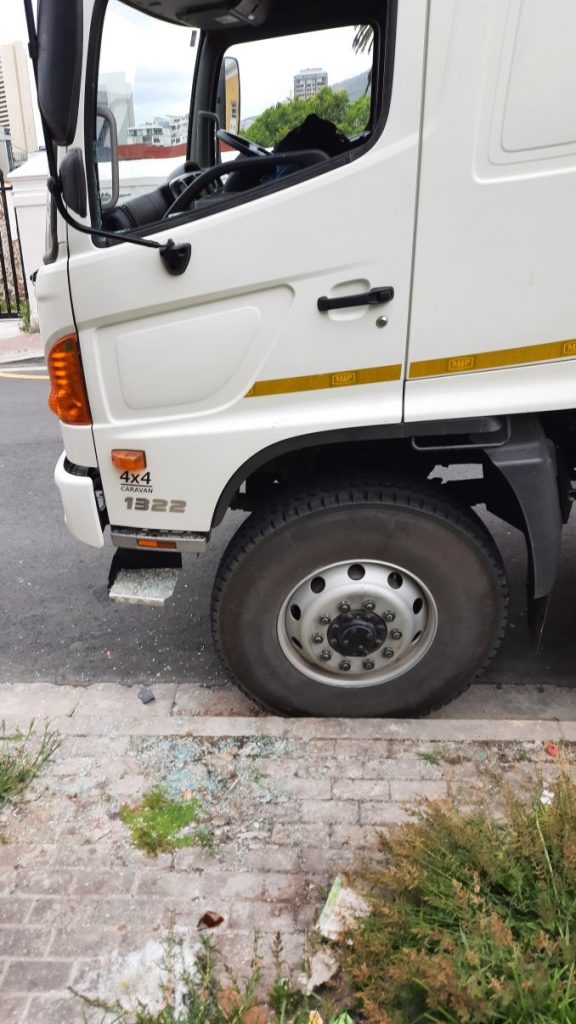 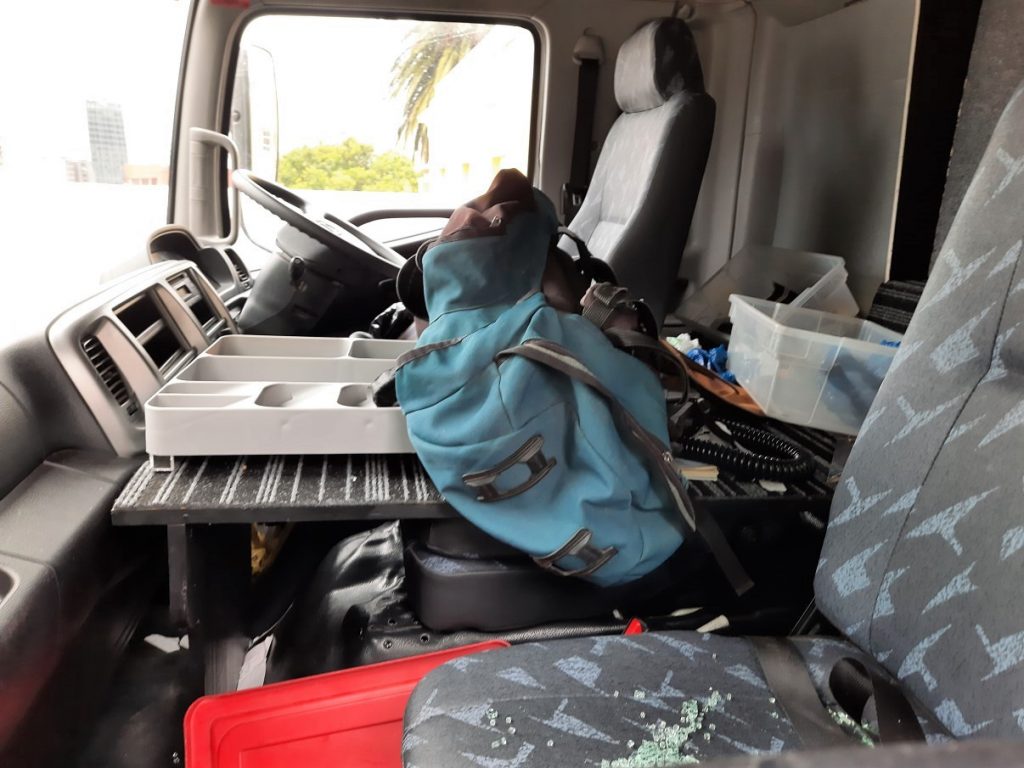 As our cabin is a king cab, we have lots of space behind the seats and we had decided to store overflow stuff from the ‘home’ inside the truck.

We had stored extra jackets, sleeping bags, some power tools, ammo boxes, a backpack etc. Unfortunately also my day pack with the binoculars. I had taken out my camera, but forgot about the binoculars. Whomever it was, they must have been watching us and taken a chance to break in. The fact that we were parked next to a little vacant plot that was pretty overgrown didn’t help. Whomever had done it must have felt pretty invisible!

We were so pissed off!

But we were amazed at the help and sympathy of the local residents, especially Abdhul. He went out of his way to contact a friend police (who was unfortunately called to a taxi protest  in Cape Town CBD, which later, we heard, turned violent and involved a shooting),  and other residents in this particular street to find out who might possibly have recorded on their camera’s who had walked out of there with boxes and backpacks. There is a small informal vagrants settlement a bit further down the street and it seems that the neighbourhood is now plagued by break ins and theft.

The police showed up and took our statement and although friendly and courteous, they were not interested in finger prints or following up with any info on the cameras. We most probably will never see any of that stuff back.

We eventually left the Bo-Kaap fairly pissed off and went to Blouberg strand to let the wind blow our worries away. The wind was in its full glory and the sea was packed with kite-surfers doing their acrobatics in the air. The wind was so strong that even the seagulls had trouble staying upright. We got ourselves another sleepover at the windy beach with a beautiful sunset. Looking at all the cars that came to park on the promenade, it seems that watching the sun go down next to Table Mountain is a popular pastime!

The following day we headed back to my sister’s house to wait for the glass people to come and replace the window.